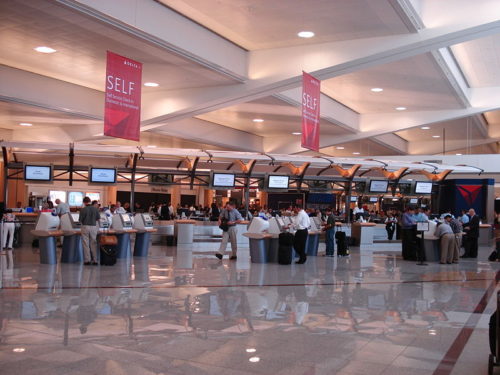 An 11-hour pre-Christmas power outage at Atlanta’s Hartsfield-Jackson International Airport had grid resilience specialists asking a tough but obvious question: Why didn’t the world’s busiest airport have a microgrid in place?

The outage delayed more than 1,000 flights and left passengers “stranded for hours in darkened terminals or seated in planes,” Elisa Wood writes on Microgrid Knowledge. “Posting on Twitter, stranded travelers questioned why the airport had no backup power.”

It turned out that Georgia Power, the local utility, did indeed have a “redundant” system to avert a blackout. But it was located too close to the fire in an underground electrical facility that took out the main power supply—so the backup failed, too.

“What the airport clearly lacked—and needed—is an advanced microgrid system,” Wood states, citing interviews with several power system experts. “The widespread blackout appears to have been the result of a series of cascading failures that caused the airport’s power system to collapse like dominos.” And “microgrids distributed at various locations throughout the facility, or nearby, could have prevented the cascade,” using some combination of renewable energy, energy storage, combined heat and power, and fossil fuel generators to keep the power on.

When grid problems do occur, advanced microgrids’ ability to “island” and isolate themselves from a faulty grid means outages can be contained faster and fixed sooner, said Schneider Electric Vice President Mark Feasel. “They can predict, prevent, or mitigate faults—that is a characteristic of an advanced microgrid.” Most advanced systems are also set up in clusters, with two or more microgrids backing each other up.

Wood notes that microgrids for airports and transit hubs are nothing new: In the U.S., they’re already in place in facilities in California, Connecticut, Vermont, New Jersey, Maine, and New York City. Chattanooga is developing a solar microgrid for its airport, and a microgrid serves the transit centre at Denver International Airport.

In Windsor Locks, CT, a microgrid originally installed in 2002 kept Bradley International Airport in operation during a 2011 snowstorm that caused extensive damage to power lines, dropping  3.2 million customers in 12 states off the grid for up to 11 days. The microgrid delivered again when the region was thrown into turmoil a year later by Hurricane Sandy.

“Any type of severe event such as a hurricane, or in this case a fire, can quickly create a massive power outage,” said Jack Griffin, Vice President and General Manager of a division of Veolia North America. “Microgrids solve this problem by generating and distributing power to critical facilities, including hospitals and airports, allowing these key service-providing assets to continue operations without interruption.”