Climate Change Contributes to Quadrupling of Ocean Dead Zones Since 1950 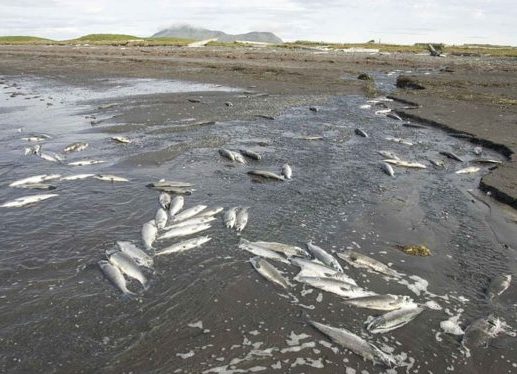 Climate change is one of the main culprits in the formation of zero-oxygen ocean “dead zones” that have quadrupled since 1950, and will lead to mass extinctions over the longer term if the causes of the problem are left unchecked, according to new research in the journal Science.

“Climate change caused by fossil fuel burning is the cause of the large-scale deoxygenation, as warmer waters hold less oxygen,” The Guardian reports. The story also attributes a tenfold increase in very low oxygen sites in coastal zones to fertilizer and sewage runoff from land.

“Major extinction events in Earth’s history have been associated with warm climates and oxygen-deficient oceans,” but “this is a problem we can solve,” said lead researcher Denise Breitburg of the Smithsonian Environmental Research Center. “Halting climate change requires a global effort, but even local actions can help with nutrient-driven oxygen decline.”

But Prof. Robert Diaz of the Virginia Institute of Marine Science, who was not directly involved with study, cautioned that “the increasing expansion of coastal dead zones and decline in open ocean oxygen are not priority problems for governments around the world,” even though “no other variable of such ecological importance to coastal ecosystems has changed so drastically in such a short period of time from human activities as dissolved oxygen.”

The world’s oceans “feed more than 500 million people, especially in poorer nations, and provide jobs for 350 million people,” The Guardian notes. “But at least 500 dead zones have now been reported near coasts, up from fewer than 50 in 1950.”

Along the way, oxygen levels in ocean waters have fallen 2%, or 77 billion tonnes, since the middle of the last century. “This can reduce growth, impair reproduction, and increase disease, the scientists warn. One irony is that warmer waters not only hold less oxygen but also mean marine organisms have to breathe faster, using up oxygen more quickly.”

Mighty Earth Campaign Director Lucia von Reusner attributed one ocean dead zone in the Gulf of Mexico to large-scale meat production on land. “These dead zones will continue to expand unless the major meat companies that dominate our global agricultural system start cleaning up their supply chains to keep pollution out of our waters,” she told The Guardian.