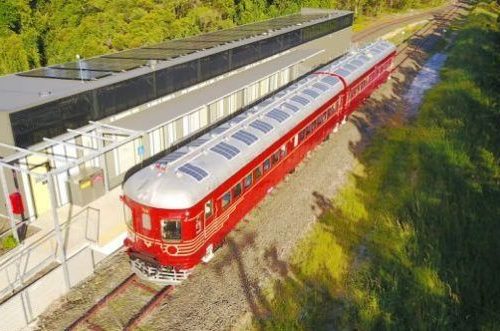 No, it won’t make much of a difference to the global carbon battle, but what is claimed to be the world’s first all-solar train should bring a smile to any climate campaigner lucky enough to be taking a beach break over the holidays in little Byron Bay, about 125 kilometres south of Brisbane on Australia’s sun-soaked east coast.

That’s where the private, non-profit Byron Bay Railroad Company has retrofitted photovoltaic panels to a couple of 1940s-vintage rail cars and the roof over a train platform to fully power a three-mile ride for up to 100 passengers over previously abandoned railway track between Byron Township and the resort town’s beach.

The company originally intended to run the tourist train on the cars’ legacy diesel engines, but backed off under community resistance (although one diesel remains operable in case of an electric system failure). It now boasts of its solar “first”.

“We searched the country and found a dilapidated vintage train, restored it, and are now powering it with a 4.6-billion-year-old power source,” joked Jeremy Holmes, the company’s development director.

Other visionaries have suggested similar track-side solar power could one day provide the much greater amounts of energy required to move fully-loaded commuter trains under the considerably less sunny skies of England.