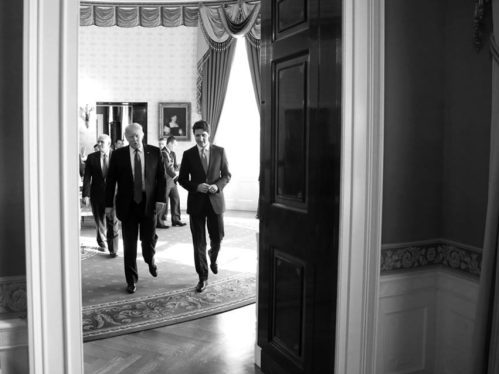 Canada and the United States are in discussions over climate- and environment-related language in two documents that are important to both governments—the revised North American Free Trade Agreement (NAFTA), and the text for next year’s G7 summit in Charlevoix, Quebec.

In the tortured NAFTA talks between Canada, Mexico, and an increasingly recalcitrant United States administration, the U.S. has called for past side deals on the environment and labour to be brought into the main agreement. But Donald Trump’s trade representatives are also “privately pushing against the inclusion of the phrase ‘climate change’ in that chapter, and against any mention of multilateral cooperation on the environment,” Bloomberg News reports, citing two sources close to the negotiations.

“While mention of climate change in a trade agreement would be largely symbolic, Prime Minister Justin Trudeau has pushed for the inclusion of such ‘progressive’ elements to help boost public support for trade,” Bloomberg notes. “Canada and Mexico favour recognizing the challenge of climate change in the agreement,” and “Canada is also pushing for stronger environmental standards within NAFTA.”

With Canada assuming the G7 presidency for 2018, discussions are also getting under way in the lead-up to the Charlevoix summit June 8-9. On a Facebook Live chat last week, Trudeau laid out five themes for the year: investing in growth “that works for everyone”, preparing for jobs of the future, gender equality and women’s empowerment, collaboration on climate, oceans, and clean energy, and building a more peaceful, secure world.

Trump is apparently going along with a Canadian initiative that “will make preservation of the world’s oceans a major agenda item,” The Canadian Press reports.

“That’s because the conversations will focus on how to preserve and bolster coastal areas that have been devastated by natural disasters, or face major threats in the future,” the news agency states, citing Peter Boehm, Canada’s deputy minister responsible for the summit.

“I think there is a certain relevance there. I know that the people I’ve talked to—and I have not talked to the president on this—there is an interest in pursuing this as one of our themes,” Boehm told CP.

At last year’s G7 and G20 summits, the U.S. behaved as such an outlier that observers began referring to the gatherings as the G7 Minus One and G19. “The times when we could completely rely on others are, to an extent, over,” German Chancellor Angela Merkel said at the time.