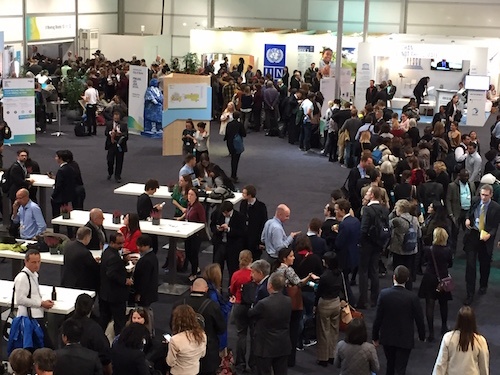 The United States is launching a campaign to counter the Powering Past Coal Alliance recently organized by its two closest allies, Canada and the United Kingdom, aiming to lock poor countries into decades of future coal purchases.

“The effort is meant to be a counterweight to nations like Canada and the United Kingdom, which formed an anti-coal coalition” last month during COP 23 in Bonn, writes E&E News [subs req’d], in a report republished by the U.S. Governors Wind and Solar Energy Coalition.

White House energy aide George David Banks told the outlet the U.S. campaign is necessary to challenge what he called “an anti-fossil fuel movement being aggressively pursued by a number of countries and environmental activists.”

Canada and the United Kingdom joined diplomatic forces to promote the elimination of coal burning in developed countries by 2030, and globally by 2050. At French President Emmanuel Macron’s One Planet Summit earlier this month, several new sign-ons brought total participation in the alliance to 33 countries and 24 businesses.

The Trump administration, however, is eager “to boost exports of U.S. coal as domestic utilities turn increasingly to cheap natural gas and renewable power,” E&E observes.

The U.S. is also looking for allies in resisting the larger international community’s urgent efforts to reduce fossil combustion in pursuit of the Paris agreement goal of stabilizing average global warming below 2.0ºC. According to E&E, America will invite “big coal exporters and importers—Australia, Indonesia, China, India, Ukraine, Poland, Japan and others”—to join its pro-coal alliance.

The American delegation at COP 23 promoted wider use of fossil fuels, as did Energy Secretary Rick Perry at an earlier conference in South Africa. In both venues, U.S. envoys promoted the image of “U.S. coal exports and coal technology as cleaner than those being developed by other nations,” E&E reports.

The claim that American coal technology is “clean” is, of course, brazenly misleading. All hydrocarbons release greenhouse gasses when burned. Coal, in particular, releases a wide spectrum of other toxic particulates, gases, and radioactive pollutants, as well.

An earlier Republican administration in Washington imagined in a report published in 2007 that a US$36-billion market would exist by 2030 for what it described then as “clean coal technology (CCT)” that would “allow coal to be burned with lower emissions of carbon dioxide.” The report anticipated sales of U.S. coal and coal-burning technology to China, India, South Korea, Australia, Brazil, Mexico, New Zealand, South Africa, and the European Union.

Today, several of those jurisdictions are seeking to phase out their use of coal entirely, and the latest American push appears to be targeted instead at poorer nations. The New York Times reports that the administration also intends to pressure the World Bank and other development agencies to reverse restrictions on lending for the construction of new coal-fired plants in the developing world. In a landmark announcement at the Macron summit, however, the World Bank made it clear it was moving in the opposite direction.

In the same spirit of colonial exploitation and commercial abuse that saw previous generations of toxic products like DDT continue to be peddled to poor countries long after they were eliminated in richer ones, America’s “clean” coal alliance now threatens to saddle many of the same nations with expensive, dirty, and climate-busting power for decades to come.