First Nations Will Assist Indigenous Ecuadorians in Claim Against Chevron 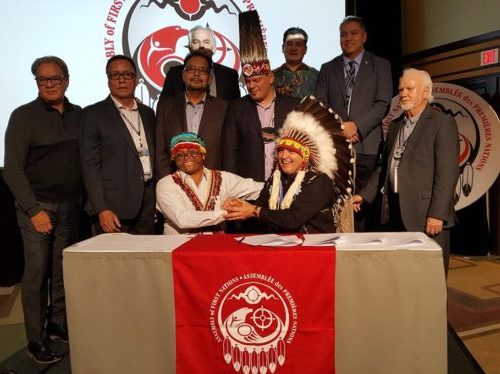 Canada’s Assembly of First Nations will help a small Indigenous group from Ecuador try to bring a quarter-century quest for compensation for environmental damage from international oil giant Chevron to a successful conclusion in a Canadian court.

The case stems from decades of casual dumping of toxic waste and other environmental offences committed from the mid-1960s into the 1990s in the traditional territory of Ecuador’s Cofán people by U.S.-owned Texaco, in the course of exploiting the region’s oil reserves.

Texaco “dumped at least 16 billion gallons of toxic wastewater into the rivers and streams of Ecuador’s Amazon basin and abandoned some 900 toxic waste pits in the rainforest in violation of basic industry standards,” the National Observer reports. “Indigenous and campesino communities were left with poisoned land and drinking water. Inhabitants have suffered a cancer epidemic and birth defects throughout a 20,000-hectare zone that locals call the ‘Amazon Chernobyl.’”

Lawyers for the Cofán communities have spent nearly a quarter-century pursuing Texaco, and subsequently Chevron, for compensation and remediation of the damages done. The companies have escaped paying any part of a US$9.5-billion judgement eventually ordered in 2013 by Ecuador’s top court.

After that judgment, the Observer writes, “Chevron sold its assets in Ecuador and has since refused to pay.” It has successfully fended off the Cofáns’ efforts to have their judgement enforced by repeatedly shifting the venue of hearings. (For an excellent account of the case, and an interview with the lawyers involved, see Warrior Lawyers by The Energy Mix subscriber Silver Donald Cameron.)

The Ecuadorians are now asking Ontario’s Superior Court of Justice to enforce their long-sought judgment against Chevron Canada under accepted international legal custom.

That entity has maintained its parent’s strategy of endless delay. It earlier fought to have the Canadian courts decline jurisdiction, taking that argument all the way to the Supreme Court of Canada before being rebuffed. In January, the Ontario court accepted jurisdiction. Chevron then asked it to require the impoverished Cofán to post a crippling $1-million bond before their case was heard. In October, the Ontario Court of Appeal rejected that motion, as well, again allowing the case to proceed.

And now, the Cofán will have the assistance of one of Canada’s most powerful Indigenous organizations, the Observer reports.

Earlier this month, AFN National Chief Perry Bellegarde signed an agreement of support with the Confederation of Indigenous Nationalities of Ecuador (CONAIE), which represents some 30,000 Indigenous villagers, and the Front for the Defense of the Amazon.

The AFN’s help, writes the Observer, “will include raising public awareness; helping with liaison to Canadian professionals, such as lawyers who are knowledgeable about Indigenous issues, and hosting Ecuadorian delegations in Canada.”

The agreement grew out of a visit to Ecuador by several Indigenous leaders from Canada in September.

“Our peoples have faced similar devastation in Canada,” Grand Chief Edward John, hereditary chief of the Tl’azt’en Nation in British Columbia, told media at the time. “We will do everything we can to bring justice to Indigenous peoples in both Canada and Ecuador.”

First Nations in Canada also forged an alliance with American Indian tribes last year to work together to resist the expansion of tar sands/oil sands infrastructure.