Analysis: Kinder Morgan Wins a Round, But Pipeline Still Isn’t a Done Deal 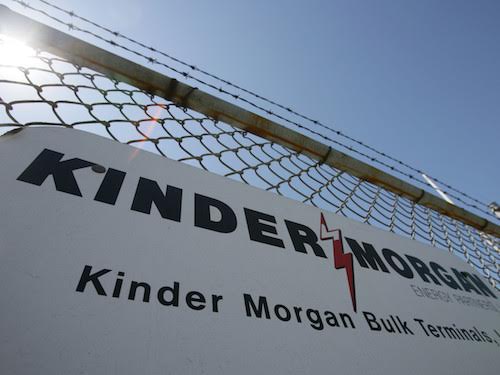 Fossil industry media and climate community listservs erupted late last Thursday with the news that a National Energy Board (NEB) panel had sided with Kinder Morgan Canada in its dispute with the city of Burnaby, British Columbia, putting the commercial interests of a Houston-based pipeline company over a municipality’s authority to enforce its own bylaws.

With the stroke of a virtual pen, the NEB added $1.9 billion to Kinder’s share value, as investors gained confidence in the company’s ability to get its Trans Mountain pipeline expansion built. Community opposition was unbowed, contrasting the panel ruling with Prime Minister Justin Trudeau’s 2016 assertion that “only communities grant permission” for major resource projects.

But except for the construction work Kinder Morgan can now initiate at its Westridge terminal in Burnaby—and the wider implications of the decision for municipal decision-making—the combatants are still in much the same place they were before this latest NEB panel delivered its opinion. Kinder Morgan won a round last week, but it is not at all a done deal that the pipeline will be built.

Kinder Morgan Canada President Ian Anderson admitted as much at the beginning of last Monday, warning that the project “could be delayed past September 2020 if it is unable to get more clarity around permitting and the judicial process by early next year,” Reuters reported. The company “said it had earmarked C$1.8 billion for spending on the project in 2018, but noted that further construction delays would lead to reduced 2018 spending. It said it planned to spend the first part of the year advancing the permitting process.”

Lost in last week’s uproar over the two municipal bylaws was the reality that those wider constraints are still in place. The decision on local plan approvals and tree cutting permit applications was just the first of a two-part appeal. Kinder’s wider attempt to scuttle municipal and provincial permitting authority is still before the NEB panel, and will almost certainly take weeks or months to resolve. An array of other court challenges and review processes are also still pending.

That’s an important reminder, because time is not on Kinder Morgan’s side. The company is $38 billion in debt. It has contended in court documents that every month of delay costs it $5.6 million in expenses and $88 million in future revenue foregone, after previously claiming it was all set to begin construction last September.

It has already decided to finance the $7.4-billion pipeline out of its own cash flow, a tacit acknowledgement that it may not be able to interest outside investors in the project.

It lost a powerful political ally with the defeat of Christy Clark’s provincial government in B.C. and the rise of an NDP-Green coalition that promptly joined the court fight against the pipeline, prompting CBC to speculate in mid-August that the shift in legal weight could break Kinder’s will.

It was forced by the sheer weight of evidence to issue a devastating final prospectus in May that acknowledged the serious risk investors faced if they bought into the project.

And none of that activity factored in the broader business risk for any company or investor that expects to see significant demand for fossil fuels through mid-century. Between growing acknowledgement of the need to keep known fossil fuel reserves in the ground, the prohibitively high cost of Alberta bitumen, and the market-transforming potential of electric vehicles and affordable energy storage, project backers should be asking tough questions about whether Kinder Morgan’s pipeline will still be running in 2025 or 2030, much less 2050 or 2060.

“While a relatively small battle in a broader legal conflict, the NEB decision marks a significant victory for Kinder Morgan, allowing it to recommence work on expanding Trans Mountain’s terminals in British Columbia,” Engle wrote on the Seeking Alpha investment site. “It also holds positive clues for the future of Trans Mountain….While the broader legal and political fight grinds on, the odds continue to appear stacking in Kinder Morgan’s favour.”

Then there’s the elusive but all-important social licence that both Trudeau and Alberta Premier Rachel Notley have put at the centre of their fossil and pipeline strategy. On The Tyee, award-winning journalist Andrew Nikiforuk delivered a litany of the “tyrannies” lining up behind the pipeline—from the panel decision itself, to the Trudeau government’s approval of the project against widespread public opposition, to the Alberta government’s interventions on Kinder Morgan’s behalf.

Nikiforuk contended that Ottawa backed the project “to please the totalitarian Chinese government,” after China signaled it wouldn’t consider a free trade deal between the countries that didn’t include a new pipeline to tidewater. Thus “Canada has become the rarest of democracies,” he wrote, “one willing to surrender its sovereignty for a pipeline ferrying a junk crude.”

As for Alberta, Nikiforuk put forward the shockingly odd metric that liquor and gambling taxes were bigger source of provincial revenue last year than bitumen royalties.

“Let me repeat that: Alberta managed its bitumen resources so poorly that it made C$2.2 billion from liquor and gambling but only $1.4 billion from the production of nearly three million barrels of bitumen a day,” he wrote. “Why? Because Notley’s government has accepted low royalties and ignored the Norwegian model: go slow, collect your fair share of the revenue, and save the money.”

But even with all of those artificial advantages lining up, time is indeed running out for Kinder Morgan to push, pull, and prod its project across the finish line—and its many, varied opponents are in the fight for the duration. At some point, investors are bound to decide there are easier ways to make a buck. And a federal government that declares its carbon targets a floor, not a ceiling and tries to show up well in international climate negotiations might also decide there’s a more honest, credible way to build a 21st century energy economy.