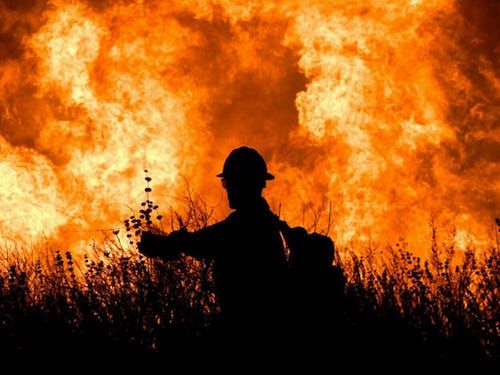 A run of “ludicrous” wildfire weather is entering its fifth day in southern California, with fierce Santa Ana winds driving a half-dozen major blazes and prompting Governor Jerry Brown to declare a state of emergency in Ventura, Los Angeles, and San Diego Counties.

The largest of the fires covered 180 square miles and destroyed more than 400 buildings in Ventura County as of Friday morning, endangering the college town of Santa Barbara, “while a new blaze in San Diego County grew quickly and dangerously, forcing a new round of evacuations,” the Washington Post reports. “These dangers came as firefighters confronted a half-dozen blazes across the region, fires that imperiled communities and homes, burned through streets and roared over mountains, forcing many to flee and leaving them with no idea when they could return home or if they would have anything to return to.”

Everyone says, ‘Yeah, this is the worst,’ but it really is the high-water mark for me,” added Ventura County battalion chief Fred Burris, a 36-year fire department veteran. “We’ve never seen a fire with this much speed and range.”

“You had to chew the air before you breathed it,” said Shane Nollsch, who had traveled from Lyon County, NV to help fight the fires.

“We are nowhere near the end of this,” said deputy chief administrative officer Ron Lane, where the Lilac fire burned more than 4,000 acres Thursday, destroyed at least 20 buildings, injured six, and triggered a wave of evacuations. “There are thousands of homes that are within the path of these fires.”

In Ventura County, the blazes spread quickly and seemed to be coming from everywhere. “We didn’t know what had happened,” said local resident Patricia Hampton. “It was like a war zone. You could hear transformers blowing up.”

In Los Angeles County, where three separate fires led to evacuation orders for more than 100,000 people, the majority of evacuees were returning home. But Mayor Eric Garcetti warned it was “still an insecure time”, with Fire Chief Ralph Terrazas adding that local weather and humidity still put the area in the “extreme range” for fire risk.

While the poorest communities are most often on the front lines in wildfires and other climate disasters, Grist notes that the flames consumed the $30-million Bel-Air estate belonging to Rupert Murdoch, the media baron who famously wrote off the reality of climate change as “alarmist nonsense”. The New York Times noted that the Bel-Air outbreak brought the fires into the heat of LA, “near iconic landmarks like the UCLA campus and the Getty Museum, home to old masters paintings and ancient Roman statues”.

Wildfire Today, a specialist publication that usually goes mostly silent by this time of year, was prolific and detailed with its reports from Ventura, Los Angeles, and San Diego County. It noted that the Thomas Fire in Ventura had burned 90,000 acres and spread all the way to the ocean, while the Skirball Fire in Los Angeles closed sections of Highway 405, one of the region’s busiest roads.

“This is a very serious situation developing in Southern California—years of drought and several days of dry Santa Ana winds followed by Ludicrous Weather with winds gusting throughout the area at 80 to 90 mph,” Gabbert writes. “This of course could have a major effect on the existing fires. All it takes is one very small ember to be blown into receptive fuels, and…well, perish the thought.”

Logistically, he adds, “wildland firefighting resources are already stretched thin covering the 80,000 acres already on fire. It will be difficult to find hundreds or thousands of additional firefighters and large numbers of hand crews and engines if the worst-case scenario develops. And the stronger the winds are, the less effective aerial resources can be. Those conditions can make it unsafe to fly low and slow over rough terrain, as they have to do, and the wind can blow the retardant or water far off target.”