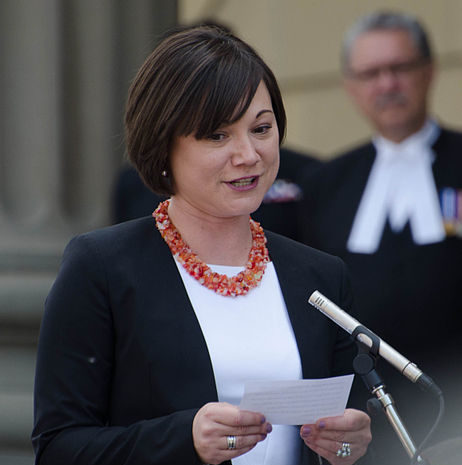 Alberta announced a trio of new climate, carbon, and energy initiatives this week, beginning with a new cap-and-trade charge on large industrial emitters designed to reduce greenhouse gas emissions 19% by 2030.

The province’s Carbon Competitiveness Incentives (CCI) apply to the 110 fossil facilities across the province that each emit more than 100,000 tonnes of carbon per year, Reuters reports. The system will be phased in over three years, using “production-weighted average emissions” as a standard to drive down the amount of carbon dioxide equivalent (CO2e) released when a barrel of oil is produced.

“Environment Minister Shannon Phillips said the regulations will reduce Alberta’s emissions by 20 million tonnes by 2020 and 50 million tonnes by the end of the next decade,” the news agency notes. “The left-leaning New Democratic Party government said the plan had been designed in consultation with industry, but the opposition United Conservative Party said it could cost jobs in a province that is still adjusting to the long-term slump in global oil prices.”

The program is expected to produce $500 to $800 million in provincial revenue per year. Canadian Press puts the industry-wide cost of the program at $1.2 billion.

“The fact is that investors are demanding credible climate action,” Phillips said. “This whole policy is designed around protection of jobs and ensuring that companies remain competitive.”

She added that “the improved rules that we are releasing today will reward companies that use best practices and reward investment in modern and efficient facilities. That’s how we are going to create a race to the top in Alberta, by rewarding the top performers in each sector.”

Cenovus Energy spokesperson Sonja Franklin called the plan “an important step forward in addressing climate change, as it will incent those facilities with the lowest emissions intensity.”

Representatives from Canadian Manufacturers & Exporters and the Concrete Association of Canada also issued statements of support, though the Globe and Mail points out that no fossil executives appeared publicly to back the plan, as they’ve done with past Alberta climate announcements.

Canadian Association of Petroleum Producers (CAPP) President Tim McMillan told the Globe the additional costs to industry “may position us to be less competitive at a time when we need to be substantially more competitive.” Pembina Institute Senior Analyst Andrew Read backed the plan, but called the three-year phase-in “an unnecessary concession that weakens the immediate benefit of the policy”.

In an early October blog post, while the policy was still in development, Read cautioned against precisely this kind of delay.

“We know from experience that incumbent companies will pull out all the stops to avoid a potential cost,” he wrote at the time. But “any concessions—such as delaying the phase-in of the full carbon price, exemptions for projects continuing to use less efficient technologies, or special treatment for lower-grade resources—will undermine Alberta’s industrial reductions and reduce revenue generated…to fund the other important reduction opportunities under Alberta’s Climate Leadership Plan. This would represent a double-whammy undermining of the goal of reducing Alberta’s GHG emissions.”

He calculated the plan would cost most of the province’s tar sands/oil sands operations up to 75¢ per barrel, while the most efficient among them would gain up to 50¢ per barrel.

The day before Phillips’ announcement, Alberta Economic Development Minister Deron Bilous unveiled a seven-year plan worth almost $1.4 billion, aimed largely at helping the province’s fossil sector innovate and reduce the emissions intensity of its operations. In 2016, Pembina’s Read warned that emissions intensity in tar sands/oil sands extraction was not improving.

“In a word, this is about competitiveness,” Bilous said. “This is about partnering with industry to ensure that they are investing in innovation so that they do reduce their carbon footprint, but they also lower their costs and they remain competitive.”

The fund will include about $440 million for the tar sands/oil sands, $225 million for GHG reductions across a wider range of industries, $240 million for energy efficiency, $63 million for bioenergy development, and $400 million in loan guarantees “aimed at reducing risk for financial institutions and other corporations that invest in renewable energy and energy efficiency measures,” CBC reports. Most of the funding will come from the province’s carbon levy.

Bilous called the announcement a response to the global realities facing the province.

“Things change,” he said. “Our biggest customer for energy—the United States—has turned into our biggest competitor. Climate change is a fact of life and a business reality. And it’s unlikely that $100-a-barrel oil is coming back anytime soon.”

“When the world thinks about new and better ways to produce energy, we want them to think about Alberta,” added Energy Minister Margaret McCuaig-Boyd. “The question isn’t if the world will need oil for some time now. It’s if the oil will be produced sustainably in places like Alberta or if it will be imported from somewhere like Saudi Arabia.”

This week, as well, McCuaig-Boyd appeared alongside CAPP Vice-President Brad Herald and Alberta Energy Regulator President Jim Ellis to announce new rules for fossil companies that walk away from their duty to clean up after themselves after an oil well is shut down.

“The crackdown would come through an update to the business licencing rules, in an effort to target companies that have filed for bankruptcy protection and then abandoned wells, pipes, and infrastructure in the oilpatch without cleaning them up,” National Observer reports. “The change would have an impact on any operators or oilpatch officials who have a history of going bankrupt or walking away from unprofitable operations and leaving taxpayers with the bill.”

“The industry is frustrated that a few bad actors are harming the reputation of the whole sector and, honestly, I don’t blame them,” she told reporters in Edmonton. “We’re here today to tell those operators who would seek to circumvent their responsibilities that enough is enough.”

Those “few bad actors” have left behind 450,000 abandoned wells across the province, saddling the province’s taxpayers with the prospect of an $8-billion cleanup bill, and the Observer notes the industry-funded Orphaned Well Association “has found itself overwhelmed” with the remediation task ahead. In May, Alberta announced a $235-million loan to help the OWA get on with the job, noting that the effort would create 1,650 jobs.