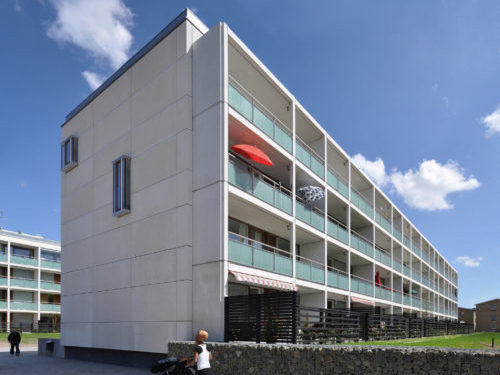 Citing several examples in Ontario, CBC News writes that non-profit supportive and affordable housing—seldom seen as on the cutting edge of anything—is the new hot frontier for Canadian architects and engineers designing “buildings so energy-efficient they don’t need a furnace, an air conditioner, or any other kind of active climate control to keep their residents comfortable through Canada’s sticky summers and icy winters.”

Once the purview of the “rich and eco-conscious” single-family homeowner, achieving such so-called “passive house” efficiency levels can add a significant few percent to construction costs. But those costs are followed by dramatic savings in energy costs thereafter.

With buildings accounting for nearly 12% of Canada’s overall greenhouse gas emissions, and most social housing in the country dependent in some way on public funding, “governments are trying to hit two birds with one stone,” CBC reports, “by including climate change targets when they put out requests for proposals for social housing projects.”

The result is a win-win: “more comfortable apartments with extremely low utility bills for some of Canada’s most vulnerable residents,” and a new generation of building stock, likely to be occupied for decades to come, that now has a much lower climate footprint.

Each of the 42 units in Ottawa’s year-old Karen’s Place “costs about $30 a year to heat,” CBC reports. The four-storey building is occupied by “people with severe mental illness, half of whom were previously homeless.” It was the first such “passive-house apartment complex” completed in the country, the outlet says.

Others are being developed, however, and the key seems to be the involvement of the non-profit housing sector.