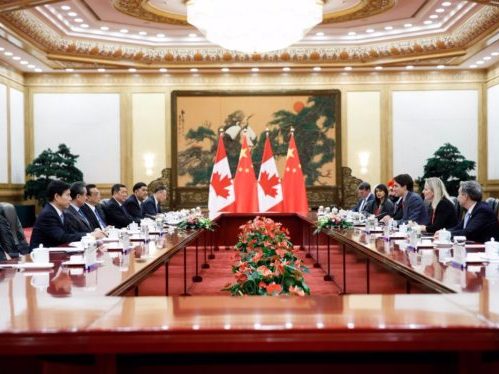 Canadian Prime Minister Justin Trudeau and China’s Premier Li Keqiang issued a joint statement in Beijing and Ottawa in which they promised a new ministerial-level dialogue on climate and the environment, and common support for the Paris climate agreement against efforts by other countries to water down its terms and avoid its commitments.

But while the joint statement includes a commitment to reduce “reliance on fossil energy” and “transitioning to clean energy,” it also lists nuclear energy and natural gas alongside renewables in the examples it offers of “cleaner fuels”.

The two leaders’ statement asserted that “intensified cooperation between Canada and China is vital to mitigating climate change and adapting to its effects around the world.” The two declared their commitment “to take concrete actions to encourage the transition to a competitive, low-carbon, climate-resilient economy and society, and promote clean growth.”

(Although Canada’s previous declarations of commitment have not always been followed by so much action.)

“The Paris agreement is irreversible and will not be renegotiated,” the two premiers asserted on Monday. They called on “all parties to uphold the agreement, to implement their NDCs [national commitments], and to strengthen their efforts over time.”

Under the heading of “Concrete Bilateral Cooperation,” the two said they would establish “appropriate” dialogue between Environment and Climate Change Canada and the National Development and Reform Commission of China, to “allow for high-level engagement and cooperation on issues of mutual interest including clean air, water, and soil, chemicals management, biodiversity, and conservation areas.”

The ministerial-level forum will be expected to share approaches and best practices to containing climate change, “including strengthening cooperation on market-based solutions, such as Canada’s approach to carbon pricing and China’s national emission trading system.”

Trudeau and Li also affirmed that their countries “will seek ways to expand our energy trade (including liquefied natural gas), as well as accelerate commercial progress in our nuclear energy sector, including through the joint development of the Advanced Fuel CANDU Reactor in China and third country markets, and the expanded trade of uranium.”

The new ministerial partnership gives formal status to an idea floated last March by Environment and Climate Change Minister Catherine McKenna, who suggested then that Canada would turn to China as its lead partner in efforts to cut greenhouse gas emissions and tap into a burgeoning new energy economy.