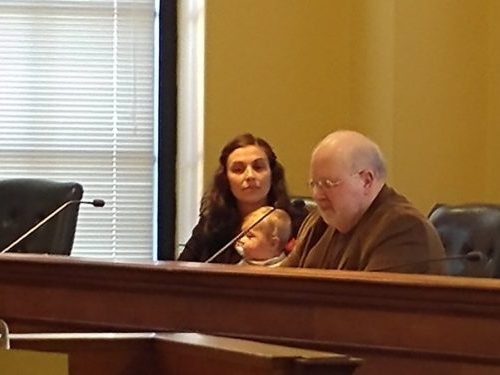 The U.S. Environmental Protection Agency held its one and only hearing on its proposed repeal of the Obama-era Clean Power Plan in the heart of West Virginia coal country. But that didn’t stop a decisive majority of local residents from speaking out in defence of the landmark climate and economic transition policy.

“Industry representatives, elected officials, and workers who rely on the coal industry here excoriated [the CPP] as a textbook example of government overreach that would cost jobs and harm families,” the Washington Post reports. “To Pruitt’s proposal to ditch it, they had a simple message: Good riddance.”

But “environmental activists, public health groups, and a collection of ordinary citizens defended the rule as an essential element in the fight to combat climate change, as well as a key measure to improve air quality and help the nation embrace cleaner forms of energy and the economic potential associated with that shift.”

Of the 280 people who took part in the hearing, VICE News estimates that 250 spoke against the CPP repeal, while only 30 supported it. “Their comments echo fear and frustration about their future. Because everyone wants to take care of their families. That’s a legitimate concern,” said Reverend Tony Pierce of Peoria, IL, but the choice is a false one. “We want a fair economy that gives these folks the jobs that they deserve and that gives them the health that they are worthy of.”

Everyone who signed up to address the EPA received a three-minute time slot—even Murray Energy CEO Bob Murray, a Trump confidant who used his time to repeat his overblown claim that the CPP was a “war on coal”.

But “minutes later,” the Washington Post reports, “72-year-old Stanley Sturgill, who mined coal for four decades in the hills of Kentucky, took the seat on the dais where Murray had spoken. He and his wife had risen before dawn and driven several hours from their home in Harlan County. He spoke of his own respiratory problems and how emissions from coal-fired power plants and other pollutants had wreaked havoc on the health of friends, family, and neighbours.”

“We need the EPA’s immediate help and not their abandonment,” Sturgill told a panel of EPA officials. “Do I really think that this administration cares what this old, worn coal miner has to say? I don’t know. I doubt it.”

Sturgill added: “Our health, environment, and global climate are actively being destroyed. And it is clear to me that EPA Administrator Scott Pruitt and [Donald Trump] are accelerating and cheering on the damage. I have come here today to ask you to stop. For the sake of my grandchildren and yours, I call on you to strengthen, not repeal, the Clean Power Plan.”

The Post coverage captures coal miners arguing back and forth about whether the industry is essential to their livelihoods, or a source of physically taxing work that calls for a pathway to safer, more diversified job options. While a West Virginia lawyer associated with the U.S. Chamber of Commerce called the CPP “unlawful and a bad deal for America,” West Virginia Rivers Coalition Executive Director Angie Rosser said its benefits would have easily outweighed its costs.

“The coal miners I talk to seem to know coal jobs will continue to dry up, with or without a Clean Power Plan,” Rosser said, but the “public spectacle” of holding a single hearing on the CPP in Charleston, WV wasn’t helpful.

“We’ve been pitted against each other by being told we’ll either have coal, or we’ll have nothing,” she told panelists. “This administration seems to thrive on public anger and conflict. It’s a distraction. When people are fighting, they are not talking…The clock is ticking to do something different than leaning on a dying industry.”

“This is about the kind of world we want to leave for our children, and we need to support a clean energy future,” said U.S. Sierra Club Climate Policy Director Liz Perrera, adding that it’s “the residents of this state who will miss out” on the economic opportunities in the mounting shift off coal. (h/t to EcoWatch for pointing us to the VICE News coverage of the EPA hearing.)

OPEC Extends Production Cuts, But Price Bounce Could Be Short-Lived