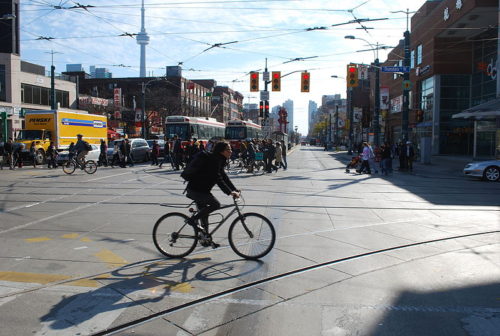 The number of Torontonians biking to work increased 34% in some neighbourhoods in just a decade, showing that if safe bicycle infrastructure is available in large urban centres, more people will use it.

Cycle Toronto is out with colour-coded Statistics Canada maps from 2006 and 2016 (since the Harper government eliminated the country’s long-form census in 2011), showing the percentage of the population that listed cycling as their main mode of transportation to work. “Across the city core we’re consistently seeing cycling mode shares of 15 to 25%,” but “numbers go as high as 33% in areas like the Annex, Trinity-Bellwoods, and Cabbagetown,” the organization notes. “These are areas where we have observed high numbers of cyclists riding throughout the year during morning and evening rush hour, but having the census data to back up this anecdotal evidence is powerful.”

The post lists core Toronto neighbourhoods that showed as much as a 550% increase in cycling to work (from six to 33% in Bloor-Spadina), plus five other areas in the city’s inner and outer suburbs where the mode share grew from less than 1% to between six and 11%.

The distributions on the map suggest “pockets in the inner and outer suburbs in which there is an emerging cycling culture,” the post states. “It is interesting to note that these neighbourhoods all have some cycling infrastructure—for example, Agincourt has a new 12-kilometre trail system (the North Scarborough Green Loop) connecting schools, parks, malls, and other destinations, which suggests there is a relationship between cycling mode share and presence of cycling facilities.”