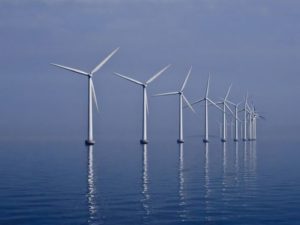 An offshore wind farm co-owned by Norwegian state oil company Statoil has come in 15% under budget, and is now delivering enough electricity to the UK grid to power about 410,000 homes.

Construction costs for the 67-turbine, 402-MW Dudgeon project were originally estimated at £1.5 billion, but ultimately landed at £1.25 billion.

Dudgeon “represents an important contribution to realizing the UK’s renewable energy strategy,” said Statoil CEO Eldar Sætre. “As part of our strategy to develop from an oil and gas company to a broad energy major, Statoil will grow significantly in profitable renewable energy, with an ambition to invest around NOK 100 billion (C$15 billion) towards 2030.”

Dudgeon is located about 40 kilometres off the English coast at Norfolk, and JWN Energy says local suppliers “account for more than 40% of the value creation in the project”.

Statoil maintains that the world will be using oil and gas for decades to come, but is positioning itself to produce only the “lowest-polluting crude” and increase its renewables portfolio. “The world needs to develop more efficient barrels,” Sætre said last month. “Competitiveness to me is carbon competitiveness and cost competitiveness.”

The company is at least partly aligned with the mounting evidence that a large proportion of known fossil fuel reserves will have to remain unburned to avert the worst effects of climate change.

“A lot of fossil fuels will have to stay in the ground, coal obviously…but you will also see oil and gas being left in the ground, that is natural,” Sætre told Reuters. “At Statoil, we are not pursuing certain types of resources. We are not exploring for heavy oil or investing in oil sands. It is really about accessing the most carbon-efficient barrels.”

In addition to the project in the UK, Statoil executives have been in discussions with Governor Jerry Brown about possible wind development off the California coast. “Because of the depth of its continental shelf, the state would likely require floating wind turbine technology, another specialty of Statoil, which has in its portfolio Hywind Scotland, the world’s first floating offshore wind farm, that came into production in October,” JWN notes.