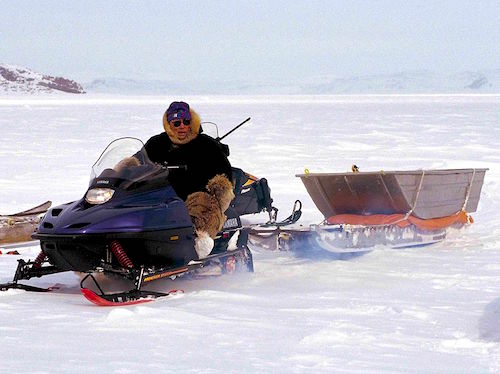 The rapid decline of sea ice off Rigolet, Labrador, an Inuit village on Canada’s east coast, is making travel dangerous or impossible and taking a toll on community life and mental health, according to a feature profile last week in the New York Times.

Rigolet “has no roads leading in or out. Lakes, rivers and streams, if they freeze over, become what the town’s 300 residents call their ‘highway’—a lifeline to nearby towns and places to fish, trap, and hunt,” the Times reports. “But as the climate has warmed, these ice roads have become unreliable, breeding isolation and, some studies suggest, elevated mental stress.”

The story opens with 61-year-old Inuit hunter Derrick Pottle trying to find a route across the sea ice to his winter cabin 60 miles away. It’s early January, and the trails should be frozen solid—but gaps in the ice make it impossible for him to cross.

“Just four decades ago, Mr. Pottle said, he would have crossed the same inlet over ice more than a foot thick in November,” writes Times reporting fellow Livia Albeck-Ripka. “Since then, Labrador’s coastal ice has declined by almost 40%, making travel treacherous, if possible at all.”

Without the ice highway, “you can’t get in or out of these communities,” Pottle said. “We’re almost like prisoners.”

While the ice recedes, coastal winds are becoming stronger, creating “the kind of conditions that can kill you,” he added. “The wind can get so severe, you can’t get warm.” While western science hasn’t established a link between the new wind patterns and climate change, “the Inuit have a word for changes they are seeing to their environment: uggianaqtuq,” Albeck-Ripka writes. “It means ‘to behave strangely.’ But it is not just the weather that’s in turmoil.”

Public health researcher Ashlee Cunsolo, director of Memorial University’s Labrador Institute, said the disorienting changes are affecting mental health. “In hundreds of interviews conducted between 2009 and 2014 across five Indigenous communities in the Nunatsiavut region of Labrador, including Rigolet, Dr. Cunsolo and her team found that the melted ice, shorter winters, and unpredictable weather made people feel trapped, depressed, stressed, and anxious and, in some cases, led to increased risk of substance abuse and suicidal thoughts,” the Times notes.

Memorial post-doctoral fellow Robert Way said the magnitude of the weather shifts in the area could only be explained by a century of warming. Cunsolo added that her research revealed the “largest climatic and environmental shift in living memory” in Rigolet.

“A flood happens, or a Hurricane Katrina happens, and people say, ‘Oh, that makes sense that people are traumatized,’” she said. When people “are exposed to this ongoing environmental stress, day after day, month after month, that has a tremendous impact.”

In his interview with the Times, Derrick Pottle said wild food makes up 95% of his diet, and described hunting and eating seal, moose, and salmon as the core of his identity. “It’s who I am,” he said. “It’s something I’ve done all my life.”

And for a community that experienced forced relocation under a federal government program in the 1960s, climate change is now producing a familiar feeling of displacement. “It’s like another form of colonization,” Cunsolo said.