Boring on One Side, Festive on the Other, COP 23 Marked Shifts in Policy and Power 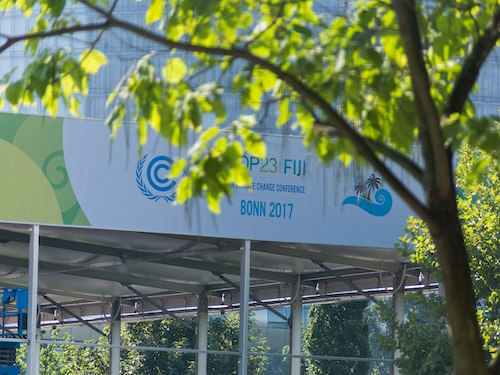 Germany’s Heinrich Böll Institute is out with a comprehensive assessment that pulls together the various strands of discussion and debate, progress and disappointment that shaped the results of COP 23, the 23rd Conference of the Parties to the UN Framework Convention on Climate Change, November 6-17 in Bonn.

(It’s a long read but an essential read, not least for the poem by Marshallese poet Kathy Jetnil-Kijiner, written for her daughter and first performed for the 2014 UN General Assembly, interspersed through the text.)

“It was expected to be a transitional and technical COP—and it was—with delegates charged with the complex task of writing the so-called ‘Paris Rulebook’ for all of the elements mandated in the Paris Agreement and Decision text, which is scheduled to be adopted next year at COP 24,” wrote Böll analysts Don Lehr, Lili Fuhr, and Liane Schalatek.

The conference also had to finalize the design for the Talanoa Dialogue next year, aimed at assessing countries’ progress toward the Paris targets and moving toward global action on deeper, faster greenhouse gas reductions. And it dealt with a dizzying array of more specific action items, from climate finance to gender action and Indigenous rights, from loss and damage to the links between climate change and agriculture.

The Böll team points to the physical set-up of this COP as one of its defining features, with official sessions in the “Bula zone” at Bonn’s World Conference Centre and community sessions at the opposite end of the city’s Rheinaue Park located two kilometres apart. In the community space, “the spirit was festive and colourful, frequently positive and solution-oriented, and very often mixed with combative notes of defiance and resistance against failed decision-making,” they note.

But the customary division into official and unofficial zones, and the longer-than-usual distance between them, meant that “interaction with climate decision-makers was decidedly difficult. Experiences and stories from the front line of climate change, and potential climate solutions, should have had a chance to be heard by the negotiators in the Bula zone.”

On the Bula side of the divide, by contrast, “COP 23 was boring. Negotiations were not only very technical but had little relevance to what happens in the real world. The ‘other COP’ in the Bonn Zone was where the action was, where real solutions (and some false ones) for implementing Paris and increasing ambition were tabled and discussed. Negotiators stuck in the Bula Zone discussing how to measure, report, and verify progress on implementation were isolated from the substantive talks of what implementation actually means—a fact that is easily seen by reading the outcome documents of COP 23.”

Yet those nuts-and-bolts decisions were always seen as the focus for this year’s COP, and an essential step toward a more meaningful COP “moment” at next year’s conference in Katowice, Poland. One of the more notable details, Climate Home News reports, was China’s emergence as a new power centre on the conference floor, successfully uniting developing country delegates and extracting concessions from developed countries on a more aggressive approach to climate action in the crucial years remaining before 2020.

“That fight was pushed primarily by a group of countries from the developing world that is currently fronted by Iran, but dominated by China. Other developing countries fell in behind them,” Climate Home notes. “According to some observers, the group of four major emerging economies known as Basic—Brazil, South Africa, India and China—also worked in abnormal concert throughout the talks, piling draft negotiating texts full of language that split the world into rich and poor.”

White House advisor David Banks claimed his country had been “instrumental” in “thwarting” efforts at differentiation between rich and poor nations. “But the real fight will be next year when the drafts must be agreed,” Climate Home states. “The reemergence of this issue signals poor countries plan to make things difficult for the U.S. and their rich world allies,” strengthened in part by stronger-than-usual cohesion between poor and middle-income countries.

“This has been the best COP—not a traditional COP,” said Gebru Jember Endalew, chair of the Least Developed Countries bloc. “It is a very important COP. I believe that all the required issues have been [going] in the right direction.”

“Trump has left a political vacuum,” said World Resources Institute Climate Change Director David Waskow. “But other countries made very clear they are willing to fill it.”

Alongside those shifts—and just like every other COP, ever—the plodding, incremental pace of this year’s UN conference was frustrating and incomprehensible to anyone looking for immediate responses to an urgent, real-world crisis.

“As ever, speech after speech called for urgency over implementation—calls reinforced this year by fresh memories of extreme climate events and by a small island state, Fiji, holding the Presidency,” notes Ian Callaghan of NDCi Global. “Also as ever, though, there was an almost total absence of the people with the money to make the urgent progress happen, namely the private sector, especially institutional investors and banks.”

“COP23’s stated aim was to go further, faster, but we must move from rhetoric to substance,” agrees energy and environment consultant Morgane Lassaux, writing for Policy Options. “Western leaders announced no new commitments regarding funding to help countries cut their GHG emissions and adapt to climate change. There was a small consolation for developing countries in the final COP23 decision text,” with the pre-2020 goals added to the final document.

But “simple words are not going to close the gap between commitments and reality,” Lassaux notes. “It is crucial that all Western leaders follow through on their Paris commitments and mobilize urgently the US$100 billion annually for developing countries, so the [Green Climate Fund] becomes meaningful for them.