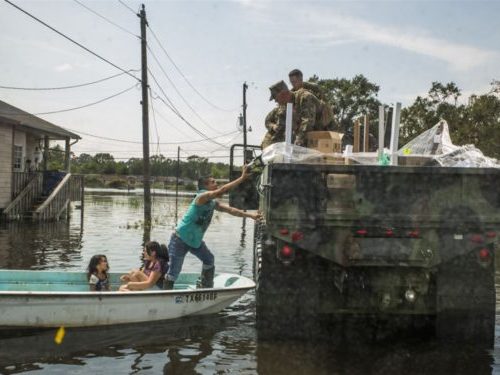 A group of 28 leading insurance firms is calling for wider, more effective insurance coverage as 2017 takes its place as one of the most expensive years on record for climate disasters.

In an update published this week, the Climatewise Initiative—with a voluntary membership that includes industry giants Aviva, Allianz, Lloyd’s, Prudential, Swiss Re, and Willis Towers Watson—said only 30% of catastrophic losses over the last decade have been insured. That gap has “contributed to a global climate risk protection gap of US$1.7 trillion, the majority of which has been borne by governments and civil society,” Business Green reports.

“Moreover, in developing countries, insurance penetration is even lower, as it is often seen as unaffordable by many communities, leaving poorer nations highly vulnerable to droughts, hurricanes, or floods.”

At the United Nations climate conference earlier this month in Bonn, the G20 pushed a new initiative aimed at delivering insurance coverage and climate resilience support to an additional 400 million vulnerable people by 2020—while small island states and other vulnerable countries made it clear that insurance alone won’t cover the loss and damage attributable to climate change.

For the industry, though, the response to climate change involves distributing its services more widely and “aligning their strategies with the guidelines of the Financial Stability Board’s Taskforce for Climate-related Financial Disclosures (TCFD),” Business Green notes.

“Our industry has been shaken by climate perils impacting urban centres,” said Climatewise Chair Maurice Tulloch, who also serves as chair of global general insurance at Aviva. “The climate risk protection gap presents insurers with one of our industry’s most profound challenges. The cost of extending sustainable insurance cover is now simply not affordable in many places. A proactive response is required.”

In a separate release coinciding with COP 23, the Unfriend Coal Network—an NGO coalition that includes 350.org, Greenpeace, Sierra Club, and Market Forces—reported that about $20 billion in global assets “have shifted away from coal operations due to concerns over climate risks,” UN Climate Action reports.

“The report says that an increasing number of insurance companies have divested from providing insurance coverage and investment funds to new coal projects,” the agency notes. “They are selling holdings in coal companies and refuse to underwrite their operations.”

That matters, because “insurance companies play a pivotal role in sustaining the whole coal supply chain—from mine construction to power plant operation, it means that without the coverage of their significant natural, commercial, legal, and political risks, major coal mines, ports, and power plants could not be funded, built, or operated.”

China On Track for Peak Emissions by 2030 or Sooner