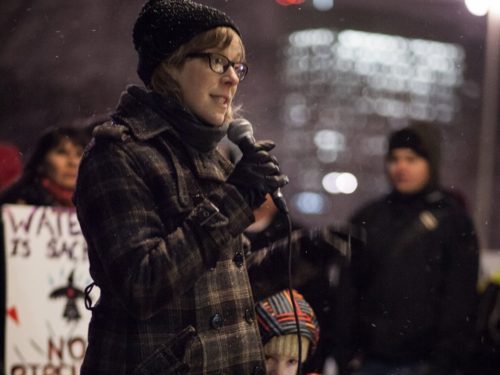 Veteran climate and energy campaigner Andrea Harden-Donahue of the Council of Canadians is calling out the misogynistic and violent messages she received over social media earlier this month, after helping to host a celebration to mark the successful, four-year fight against TransCanada’s Energy East pipeline.

In a post for National Observer earlier this month, she names five of the Facebook profile holders who sent the posts.

The trouble started November 2, a few days after the party, when Canada’s Energy Citizens, a Facebook page that Harden-Donahue says is run by the Canadian Association of Petroleum Producers, shared a photo of the event. The next day, “a Facebook page called Oil Field Confessions shared the Facebook live video I posted. A couple of minutes later, the video was shared on a Facebook page called Canada First. The comments started almost immediately after these two shares. Views of the video jumped from around 50 to over 8,000 in the course of a day. The number of comments, mostly hostile and a fair number misogynistic and/or threatening, jumped to 230.”

Was it random? “It certainly didn’t feel that way to me as I struggled to spend the day caring for my daughter while managing my incessantly pinging phone,” she writes.

Harden-Donahue notes she’s “not the first woman to face the additional misogynistic hate speech associated with taking a public position on the energy sector in Canada.” Ultimately, “Indigenous allies and grassroots activists are more likely to face this harassment and less likely to have the institutional support I have working with a non-profit organization.” But from Indigenous women like Melina Laboucan-Massimo, to political figures like Environment Minister Catherine McKenna and Alberta Premier Rachel Notley, she says women in the public eye are being targeted through “a confluence of pro-oil style Facebook pages with anti-immigrant, xenophobic, misogynistic, and racist language.”

[And it has to be said…in the last week, one Canadian climate activist had to be persuaded—repeatedly, and over a period of several days—to modify a post that took a disturbingly similar tone toward Notley. – Ed.]

“While Facebook has offered little in the way of support—the comments largely failed to break the site’s community standards—I take comfort in knowing that we are collectively beginning to reckon with the end of the fossil fuel era,” Harden-Donahue writes. “We are in a critical moment of history with forces pulling towards hate and supporting existing structures that benefit few, contrasted with those organizing towards a more equitable, sustainable way of being. For my part, I won’t let a handful of sexist bullies stop me from speaking out against extreme energy, and for the type of economy and community I hope my children will enjoy.”