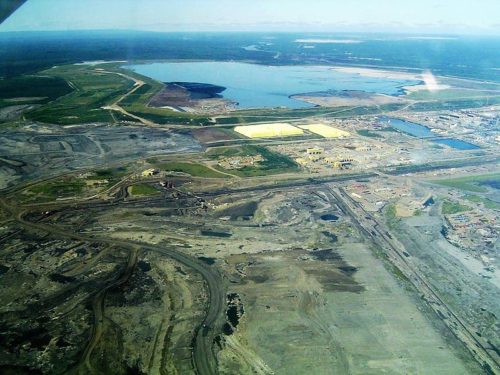 Ignoring a decade of research, Canada’s federal government is insisting it can’t tell whether hydrocarbons present in the water of the Athabasca River are leaking out of the seven unlined ponds along its banks, where open pit tar sands/oil sands mines store 1.3 trillion litres of toxic waste tailings from their operations.

The National Observer reports the government made its claim in a response to a complaint filed with NAFTA’s Commission for Environmental Cooperation last June by two environmental groups and a Dene man. At the time, Toronto-based Environmental Defence and the Natural Resources Defense Council alleged Canada was failing to enforce Fisheries Act prohibitions on the release of “deleterious substances” into water frequented by commercial fish species.

Environment and Climate Change Canada (ECCC) responded that its enforcement officers and scientists “did not have reasonable grounds to believe that there were violations of the Act” because, “when deleterious substances were found in groundwater samples, enforcement officers could not determine if they came from natural or anthropogenic (i.e. oil sands industrial activity) sources.”

The department said that after five years of failing to establish an industry fingerprint in the “deleterious substances” it detected in groundwater, it gave up and “redirected its enforcement efforts toward other issues.”

The claim that there is no way to tell where contaminants come from appears to be contradicted by the government’s own internal communications, as well as available external science.

The Observer reports that a 2012 internal memo to Harper-era natural resources minister Joe Oliver “shows that federal scientists had discovered a clear presence of tailings toxins in local water sources.”

The memo advised Oliver that “studies have, for the first time, detected potentially harmful, mining-related organic acid contaminants in the groundwater outside a long-established out-of-pit tailings pond.”

Indeed, a study by non-government researchers nearly a decade ago “pegged tailings leakage at 11 million litres a day, potentially reaching 72 million litres per day,” the outlet recalls. Highly regarded limnologist David Schindler reported in a journal article in 2010 that “tailings pond leakage or discharge” was the most likely source of toxic pollutants in the Athabasca. In 2014, federal scientists wrote in the journal Environmental Science and Technology that they had identified an industrial “chemical fingerprint” in Athabasca water contaminants.

But other studies have produced more equivocal results. And even with a general conclusion about the source of contaminants in the region’s water, the government may still lack sufficient precision in chemical attribution to take a particular company to court.

Ottawa says it’s working on that. “In an effort to address the knowledge gaps related to identifying seepage from tailings ponds,” it advised the CEC in its submission, “ECCC scientists have been working diligently to develop the scientific tools necessary to determine whether tailings pond seepage is occurring, and its extent and impact.”

But if that’s the case, observes Melody Lepine, a member of Mikisew Cree First Nation whose territory includes much of the tar sands/oil sands operating area, “it’s troubling to know after 50 years there’s still not enough data and research and management of tailings ponds.”

The CEC has 120 working days to review Canada’s submission, then another 60 to schedule an opportunity for the environment ministers of Canada, the U.S., and Mexico to vote on whether the agency should produce a non-binding “factual record” of the case—the stiffest rebuke available to it.