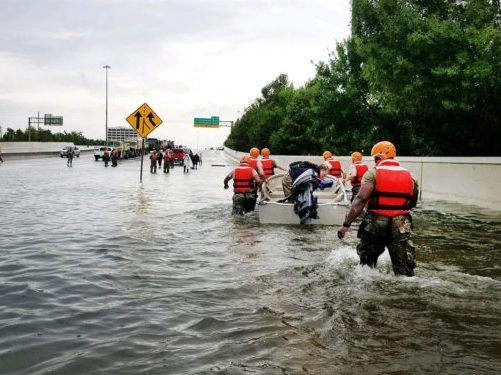 Global warming has made the Biblical-scale flooding of south Texas during Hurricane Harvey a startling six times more likely—and that’s just since the year 2000, according to a new paper in the Proceedings of the National Academy of Sciences.

“Biblical” was exactly how some of the U.S. state’s deeply fundamentalist Christians saw the August storm that dumped a metre and a half of rain on Houston, flooding as much a third of its surrounding county and forcing at least 10,000 people from their homes. Others saw a more human influence.

It could have been both, wrote MIT hurricane scientist Kerry Emanuel. “By the standards of the average climate during 1981-2000,” he noted, “Harvey’s rainfall was ‘biblical’ in the sense that it likely occurred around once since the Old Testament was written.”

It will almost certainly happen again, and much sooner. “Climate scientists continue to project that as the century goes on, hotter seas and more humid air are likely to make tropical storms more intense,” Bloomberg notes.

According to Emanuel, “global warming has already helped increase the annual likelihood of Harvey-like rainfall six-fold since the end of the 20th century.” Depending on decisions and progress at sessions like the just-ended United Nations climate conference in Bonn, the odds may triple again before the end of the 21st century, to an annual probability nearing one chance in five, he adds.

EVs Have One-Sixth the Climate Impact of Internal Combustion, But Only in Canada. (Pity.)