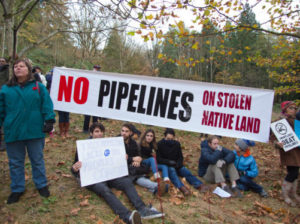 With Alberta Premier Rachel Notley about to kick off a high-stakes promotional tour for Kinder Morgan’s controversial Trans Mountain pipeline expansion, 20-year-old protester Hayley Zacks has published an evocative opinion piece, explaining why she was prepared to risk arrest to fight the project.

Zacks and her friend Jake Hubley were arrested in Vancouver Wednesday and detained on charges of obstruction of justice and criminal mischief, after sneaking into a news conference by Prime Minister Justin Trudeau and confronting him over his decision to approve the pipeline.

The charges were later dropped. But “as I sat for an hour in the dark, cold paddy wagon, I replayed the action I had just taken and decided that it was absolutely worth risking arrest to have our message to stop Kinder Morgan heard,” Zacks writes for National Observer.

She notes that, as a member of the generation that only knew Stephen Harper as prime minister, and as a settler on unceded Tsleil-Waututh, Squamish, and Musqueam territories, she’s now embarrassed to say she voted for Trudeau in the 2015 federal election.

“It was scary to find our way into a federal event with high RCMP security, and it was certainly not my first choice for how to get a moment of the Prime Minister’s time,” she recalls. “However, as we get closer and closer to global temperatures beyond two degrees of warming, it feels vital to do whatever it takes to stop fossil fuel infrastructure like the Kinder Morgan pipeline that increases emissions beyond a livable planet. The reality of global climate change that impacts my generation, and future generations, is much scarier to me than being arrested for entering the Prime Minister’s event.”

At the media session, Zacks and Hubley asked Trudeau to reverse his approval and stop the Kinder Morgan pipeline. “As Jake and I were being dragged away by private security, the Prime Minister responded by commending our activism,” she writes. “What he failed to address, however, was our questions and concerns about the pipeline. Although Prime Minister Trudeau nodded along as I spoke, I do not feel he heard us. This activism he congratulated is only necessary because of the dangerous and detrimental decision his government has made on the pipeline.”

Notley, meanwhile, plans to begin her promotional trip for the project in Toronto today, before travelling to Ottawa, Edmonton, and Vancouver. “I don’t think her tour will have much effect,” said former Alberta energy minister Ted Morton, when the trip was first announced earlier this month. “It will attract more opponents than supporters.”