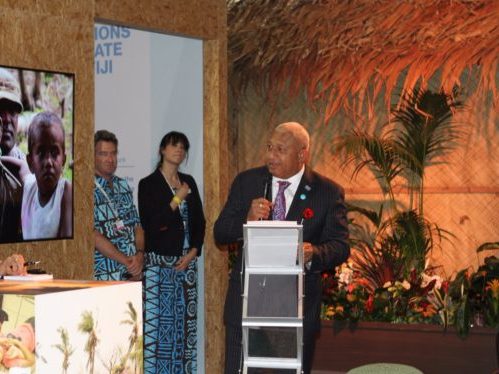 A key takeaway from this year’s United Nations climate change conference (COP 23) is that, when it comes to putting a practical foundation under the high-minded pronouncements in the Paris agreement, the details matter more than the headlines.

Which means the Paris process has entered a potentially perilous moment when the urgency of the climate crisis is mounting by the day, public expectations are (quite rightly) high, the commitment to action extends far beyond national governments—yet negotiators have to focus on nuts-and-bolts issues that are numbingly technical for the large majority of us, but will still determine the success or failure of a crucially important global deal.

It means negotiators get to celebrate incremental but hard-fought victories that push the Paris “rulebook” closer to completion, while setting the stage for more obviously significant dialogue at next year’s conference in Katowice, Poland. And that the discussions that most immediately match up with the world-wide momentum for climate solutions take place at the margins of the main event, in the hundreds of side meetings that coincide with the official proceedings.

In several conversations at this year’s COP, I got a better appreciation for the history behind the Paris agreement and the complexities that have resulted. Past climate negotiations put the onus for carbon reductions on the countries that have gained from the fossil fuel era. Paris calls for action commitments from all countries, with financing from developed countries to help the poorest and most vulnerable implement their plans, and monitoring to make sure everyone keeps their promises. The agreement is built on country-by-country statements of voluntary action, rather than the kind of top-down target-setting that characterized the Kyoto Protocol.

All of which helps explain the importance of a concept as esoteric as transparency to the effort to deal with a problem as brutally physical and immediate as climate change. Countries can’t afford to deeply trust each other in a process in which everyone is expected to negotiate for their own perceived national interest, rather than the common good. And the basic narrative of the climate crisis—a small number of countries benefiting from the industrial revolution, the large majority suffering for it, and suffering grievously—is not the kind of history that encourages anyone to take anything at face value.

So we end up in a formal setting where national representatives can, without the slightest whiff of self-parody, spend hours hashing out the bloodless official language of a COP decision, where the difference between a “should” and a “shall” could direct billions of dollars and change many millions of lives.

The first time I saw a COP in action, two years ago in Paris, I was outraged, heartsick, and determined never to lose my critical perspective on a deliberative process that felt so remote from the climate realities everyone had presumably gathered to confront. Two years later, my inclination is still to mock the process, as often as not using the square-bracketed text that is [standard for language that is still subject to negotiation] [totally outside real-world experience] [hard to reconcile with a climate crisis that needs immediate, decisive action].

But I also know that, for better or worse, the COP is an essential process for the survival of humanity on Earth, it’s the best the nations of the world have been able to come up with, and even slow, limited victories hold out the prospect of profound, transformative change for people and communities.

I had a bad 18 hours or so, was too angry to sleep one night, when it became clear that Fiji’s COP, the first ever to be chaired by a Pacific island state, would send the world’s most vulnerable nations home empty-handed on the life-and-death issue of loss and damage. Then a colleague on the Canadian civil society delegation pointed out that it doesn’t much serve climate justice, only shifts the locus of climate injustice, if developed countries accept financial responsibility for loss and damage—then see their historic wrongs paid for by a farmer in Cape Breton or a first- or second-generation new Canadian in Calgary who pay their taxes, rather than a multinational fossil that doesn’t.

I can’t say for sure that Canadian negotiators had precisely those calculations in mind when they obstructed past years’ efforts to address loss and damage (though the delegation was more “constructive”, in COP-speak, this time around). I can say with high confidence that the White House delegation did not. COP 23 does still leave us with loss and damage as an urgent, unresolved issue of both justice and practicality, which tells me that we might need a different “modality” (more COP-speak) to address it. Why am I not surprised that Andrew Gage of West Coast Environmental Law was already on that issue, if not literally on the case, two years ago in Paris?

As always, the most interesting, most obviously transformative discussions took place on the margins of the official process.

Even with decisions on loss and damage deferred, COP 23 was a moment when Pacific islands and other small island states made themselves heard, putting the brutal front-line impacts of climate change at the centre of the discussion.

The conference took steps to make Indigenous voices and experience more prominent in COP deliberations, and agreed to a plan that brings a gender lens to climate decisions.

The push for a just transition for fossil fuel workers and communities emerged as a central theme for the COP, and for year-round action. It will almost certainly become more prominent in the lead-up to COP 24, which will convene in the heart of Polish coal country. One of my biggest takeaways from Bonn was the positive frame I learned for just transition efforts—the argument that a pathway to retraining or early retirement for people who work in sunsetting fossil industries is the best way to deliver faster climate action, by building a consensus that includes the people closest to today’s fossil economy.

Informal sessions looked at strategies for speeding the decline of the global coal industry, and for scaling back oil and gas supply rather than waiting for markets to solve the climate crisis by cutting into demand.

And the conference cemented the absolute isolation of the Trump White House in its efforts to promote the U.S. coal industry and undercut the Paris agreement. As COP 23 unfolded, more and more participants began distinguishing between the White House delegation that held the country’s official credentials and the real U.S. delegation. A coalition of states, cities, businesses, and non-profits ran their own pavilion outside the main conference hall, organized a stream of high-profile side events, networked incessantly, and delivered the message that #wearestillin—that mainstream America is still determined to honour its commitments under the Paris agreement, even if the [former reality TV star] [failed real estate tycoon] [Twitter-obsessed buffoon] [Vladimir Putin proxy] currently occupying the White House is not.

This commentary necessarily ends with a loud shout-out to the Canadian civil society delegates who spent two weeks of 18-hour days in Bonn monitoring the negotiations, taking notes as the process unfolded, advising delegates on some of the key technical issues they were dealing with, sharing information across the international climate action network, and pushing key climate justice issues—from transparency and climate finance, to Indigenous rights and gender equity, to just transition—into the negotiating mainstream. You’re climate heroes, every one of you, and it was an honour to spend the last two weeks in your midst.