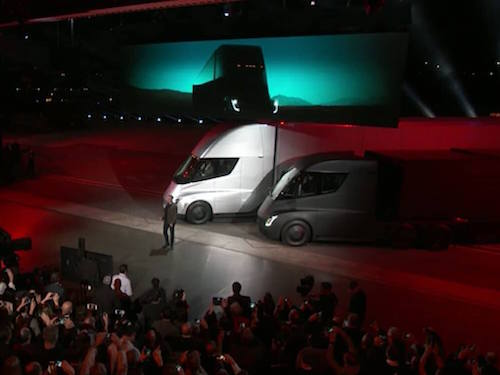 At an elaborately-orchestrated launch event at his company’s Hawthorne, California design studio, Tesla CEO Elon Musk unveiled a prototype electric semi truck that he said will be battery-powered, nearly self-driving, exhaust-free, and cheaper to operate and maintain than conventional diesel vehicles.

“The point of doing this is to give a hard-core smackdown to gasoline cars,” Musk said. “You’ll be able to drive from Los Angeles to San Francisco and back.”

Tesla claims the truck will travel 500 miles on a charge, sufficient for many existing route, with a battery capable of recharging to 80% in half an hour. It will go from 0 to 60 in five seconds without a trailer, 20 seconds carrying a maximum 80,000-pound load. Musk said that’s less than one-third the time for a conventional diesel rig.

The new design will be expensive to buy but cheap to operate, he added, with fewer moving parts requiring regular maintenance. He said the truck will cost $1.26 per mile to operate, less than today’s $1.51 for diesel—and just $0.85 if the vehicles reduce wind resistance by travelling in convoy.

Tesla expects the trucks to go into production by the end of 2019.

“In typical Tesla fashion, the truck is a sharp departure from industry norms,” the New York Times notes. “The cabin is spacious enough for a driver and passenger to stand. The driver’s seat is in the centre of the cab, not on the left side. It is flanked by two laptop-size video screens providing navigation and scheduling data as well as images of blind spots and other areas around the truck.”

The vehicle “will be equipped with radar sensors, cameras, and processors to enable drivers to use a version of Autopilot,” the semi-autonomous feature available on some of the company’s cars. “Autopilot can automatically steer, accelerate, and brake for other vehicles and obstacles, although drivers must keep their eyes on the road and their hands on the steering wheel while using the feature.”

The Times notes some analyst skepticism that Tesla will deliver on its promised 500-mile range, with investment bankers at Bernstein describing a range of 300 to 450 miles as “a significant constraint”. Diesel Technology Forum Executive Director Allen Schaeffer maintained that “diesel is the most energy-efficient internal combustion engine,” cautioning that “aspirations and predictions for new fuels and technologies are high, but must be evaluated in the context of reality.”

“Elon’s showmanship remains intact, even as his customers’ patience for Model 3 delivery wanes,” Karl Brauer, executive publisher of Kelley Blue Book and Autotrader, told CBC News. “The specs on the new semi truck and sports car would put both vehicles at the top of their segments…assuming they can be produced and sold as part of a sustainable business plan.” But “so far that final element has eluded Tesla Motors, which makes it difficult to see these vehicles as more than ‘what-if’ concept cars.”

In an advance article on the launch, Bloomberg raises some interesting questions about the Tesla truck, including their potential to platoon on auto-pilot, the infrastructure available to support them, the first customers they’re likely to attract, and where the company would be able to locate a mass production facility.