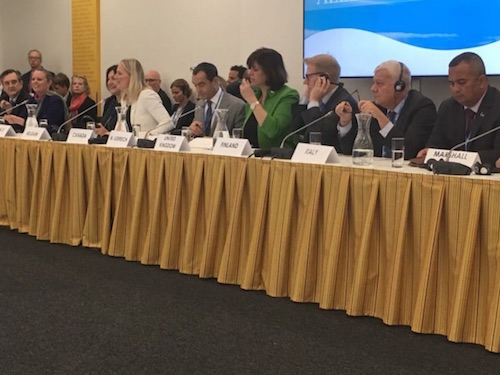 Canada and the UK have launched the Powering Past Coal Alliance, a collection of 20 countries, six provinces or states, and one city committed to phasing out coal, shifting to cost-competitive renewable energy alternatives, and embracing the health and economic benefits that will result.

The Alliance opened with 25 signatories. By the end of the 75-minute launch event on the second-last day of COP23 in Bonn, El Salvador and Oregon had both signed on.

“Canada and the UK are right to kick-start the Alliance, as science tells us that OECD countries need to phase out coal by 2030 at the latest,” she added. “There is a particularly exciting opportunity here for the Alliance to be outward-looking, and to ensure that as the core membership implements the coal phaseout in their domestic jurisdictions, they are also seeking out opportunities to encourage themselves and other countries to shift international financing away from coal, and to support jurisdictions in their efforts to make the coal-to-clean transition.”

Now, a big push is on to sign up more countries, subnational governments, cities, and businesses that have committed to low-carbon or 100% renewable targets, said Canadian Environment and Climate Minister Catherine McKenna, who co-chaired the launch along with UK Business, Energy and Industrial Strategy Minister Claire Perry and Bloomberg New Energy Finance Chair Michael Liebreich.

“The path to the transition away from coal looks different for all of us, but we’re all here for the same reasons,” McKenna said. Coal is “the dirtiest fossil fuel in terms of carbon pollution” and is “literally choking our cities and our people,” causing nearly a million deaths per year and billions in economic costs.

“So go, find a friend, get them to join the coolest club in town,” she told participants.

In its analysis of the announcement, CAN-Rac traces the origins of the alliance back to “years of grassroot advocacy by environmental and health groups” in Canada, leading to action by Nova Scotia, Ontario, then Alberta that became cornerstones for the federal commitment to phase out coal by 2030.

“Which makes the Canada-UK moment a pretty good template for making domestic policy change on climate, then using that change to bring relevance and ambition to the international arena,” CAN-Rac notes.

Ontario Environment Minister Chris Ballard said his province has saved $4.4 billion per year in avoided health, environmental, and social costs since it burned its last lump of coal in 2014, a phaseout that still ranks as one of North America’s biggest carbon reduction efforts.

“In 2005, there were 53 smog advisories issued in Ontario,” he said. “In 2016, two years after our last plant was closed, there were none. Zero. Our children can now play outside without risk of damage to their lungs, their health.”

Fiji Minister for Climate Change Aiyaz Khaiyum stressed the symbolic importance of his country joining the alliance. Like many Pacific Island nations, “we don’t use coal, we’ve never used coal, we don’t intend to use coal,” he said. But the alliance is still an important step to speed up reductions in countries’ carbon footprints.

While several of the government ministers present, including the UK’s Perry, made a point of stressing their commitment to carbon capture and storage technologies [good luck with that!], at least one country was prepared to extend its ban to another unsustainable energy technology. Austrian Environment Minister Andrä Rupprechter said coalition government talks in his country could result in a 2025 coal phaseout commitment being accelerated to 2020, without having to embrace nuclear technology. “Let’s power past nuke, as well,” he said.

Natan Obed, President of Inuit Tapiriit Kanatami, said a coal phaseout will have “very positive impacts” for Canadian Inuit who have been “affected by global emissions since the beginning of the industrial period.” With the Arctic warming twice as fast as the global average, “we are already seeing massive impacts from climate change,” he said. “The world as we know it is just slipping away, melting away, before our eyes.”

With its potential to curtail pollution ranging from black carbon to mercury contamination, he said the Alliance held out “more hope for us as a people to be able to maintain our lifestyle, culture, and identity in a way that we have for millennia.”

Courtney Howard, President-Elect of the Canadian Association of Physicians for the Environment, recalled a 2009 study in The Lancet that cited climate change as the century’s biggest global health threat.

“I had been taught to treat heart attacks and strokes, and I wasn’t sure how an emergency physician was supposed to treat climate change,” she said. But six years later, in 2015, The Lancet also identified the response to climate change as the century’s biggest public health opportunity—and a coal phaseout as one of the main measures to achieve it.