Africa Can ‘Leapfrog’ The Industrialized North By Dumping the Traditional Grid 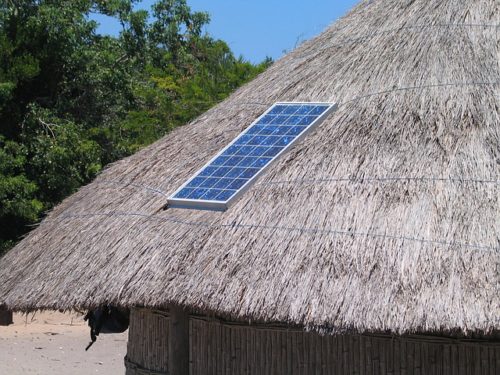 What The Economist magazine calls “a happy combination of innovation and falling costs for renewable energy” may allow much of Africa “to leapfrog ahead” of the rich North “not once but twice, skipping both polluting fossil fuels and the electricity grid itself.”

Many people in Africa lack reliable electric power. In many countries, grid power has not reached rural areas. Getting wires to everyone would require the world’s poorest continent to invest US$63 billion a year for the next decade or so—roughly eight times current levels.

And even where the grid reaches, The Economist writes, hooking up a family home can cost US$2,000—more than the average annual income in a country like Rwanda.

The “leapfrog” solution, the outlet suggests, will be mini- and micro-grids powered by the sun or wind, remotely controlled by integrated cell phone connections.

The cost of solar has plummeted more than 80% on the continent since 2010; wind prices are also falling fast. Grid-connected wind and solar in South Africa are now among the world’s cheapest, the outlet writes, citing research by the University of Cape Town’s Anton Eberhard.

Meanwhile prices for small solar-powered lights tumbled by 80% between 2010 and 2015, and the cost of serving a typical large (for Africa) home with low-powered lights, TV, and radio is forecast to fall by another 45% by 2020.

“Rooftop solar installations can power a home,” The Economist observes. “Slightly larger ‘micro-grids’ can light up a village.”

A new business model dubbed “paygo” has already brought basic rooftop solar power and cell phone service to as many as a million African families, with the number doubling every 18 months. “A built-in connection to the mobile-phone network allows the provider to switch [the service] on or off remotely. Instead of shelling out $250 or so up front for an entire system, customers can buy electricity for the equivalent of 50 cents a day using mobile money. If they run out of cash, their power is cut off until they are in funds again.”

Meanwhile, “a growing number of energy-intensive businesses such as mines have been putting up solar panels to replace diesel generators. The [International Energy Agency] reckons that this can cut a firm’s energy costs by half.”

Similar larger systems are also beginning to appear in town-scale mini-grids, “which are much cheaper and easier to install than full-scale national power grids.”

Alliances with cell phone companies create synergies, helping to finance the build-out of such a distributed service system while cutting “one of mobile phone companies’ biggest expenses: diesel for the generators that power their masts. By one estimate, this accounts for as much as 60% of the cost of operating their networks in Africa.”

“Minigrids,” The Economist enthuses, “can thus help to spread not just energy but, just as important, phone and Internet connectivity.”

Insurers From A to Z Turn Their Backs On Coal