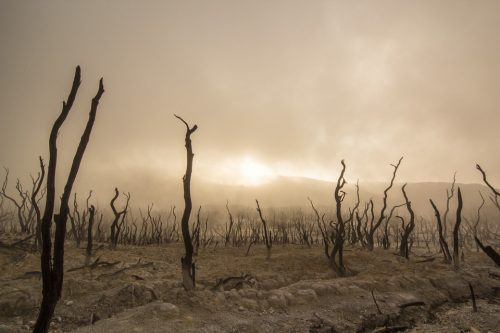 Science has put humanity on notice: without a profound change in middle class expectations and consumption, humanity will exhaust the planet—and climate change is only one of the ways we’ll do it.

That’s the central message from a paper on the state of the planet co-signed by more than 15,000 scientists from around the world. It is a follow-up, after a quarter of a century, to a previous warning signed by a tenth as many scientists in 1992.

Back then, a survey of critical earth systems disclosed humanity to be “on a collision course with the natural world,” write the authors of the latest report, led by University of Oregon forester William Ripple. “They described how we are fast approaching many of the limits of what the planet can tolerate without substantial and irreversible harm.”

In their new paper, Ripple and his fellow researchers checked the “available time-series data” to determine how humanity has done over a quarter of a century on those dimensions of concern. Their judgement is grim: “With the exception of stabilizing the stratospheric ozone layer, humanity has failed to make sufficient progress solving these foreseen environmental challenges, and alarmingly, most of them are getting far worse.”

Since 1992, “carbon emissions have increased 62%,” Ripple said, “and the global average temperature change has paralleled that. Also since 1992, we have two billion more people on Earth, which is a 35% increase.”

The problem is not in the sheer human numbers, observed co-author Eileen Crist, a Virginia Tech professor of science and technology in society. “What is happening is that the global middle class is growing, and it’s growing extremely rapidly.” Crist calls the expansion of the middle class to more than three billion people today, with five billion in sight by mid-century, “the most significant event” of the last 25 years for the environment.

While fewer people in poverty is a good thing, there is, CBC News writes, “a catch. It’s the middle class where people begin to increase their carbon footprint: they buy appliances and cars, eat more meat, and travel.”

Beyond that, said Crist, “we are in the throes of a mass [wildlife] extinction event that is anthropogenic. This is not something we can fix.”