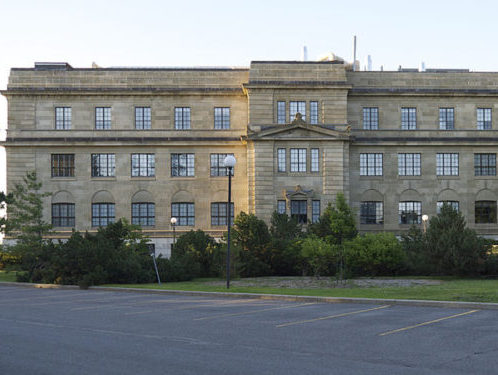 Canada’s National Research Council wants the nation’s buildings to be ready for a country as much as 5.0ºC hotter than it is today—a degree of warming far beyond the global average of “well below” 2.0Cº that parties to the Paris climate agreement have targeted, and even the 3.0º the UN Environmental Program recently called probable this century.

The startling premise is embedded in the agency’s call for tenders to provide it with future weather forecasts reflecting “the expected impacts from average increases in global temperature from 0.5ºC Celsius up to a maximum of 5ºC,” The Canadian Press reports.

“Canada’s homes and highways were built with assumptions about weather patterns that are no longer relevant thanks to climate change,” CP writes. “Now the NRC is asking for help to figure out what kind of weather to expect in the coming years, so it can revamp national building codes to ensure everything from houses and office towers to bridges and wastewater systems can withstand the consequences of a warmer planet.”

The climate resiliency initiative is part of the pan-Canadian climate framework reached a year ago between Ottawa and most provinces and territories, which have constitutional jurisdiction over construction. This spring, the federal government budgeted $40 million over the next five years for its work.

“Canada’s buildings and public infrastructure systems are designed based on historic data assuming a stationary climate, and were not designed to accommodate certain extreme weather events being attributed to climate change,” the Council’s call for tenders reads. “As such, there is a growing risk of failure of buildings and infrastructure.”

Data generated by the successful bidder will be used to create a model national building code update promised for 2022. Provinces and territories can’t be mandated to adopt its measures, but are likely to do so as the costs of climate damage mount.

Floods and forest fires, exacerbated by climate change, have driven up costs borne by the federal government for disaster assistance. Since 2011, they have averaged more than a third of a billion dollars a year, “three times what the average annual cost was over the previous decade,” CP reports.

Buildings account for nearly 12% of Canada’s overall greenhouse gas emissions and more than a quarter of energy-related emissions. Quebec’s Équiterre and Alberta’s Pembina Institute recently urged the federal government to take advantage of the same building code rewrite to add “incentives for compliance, promotion, and enforcement” of explicit targets to reduce those contributions.

The World Green Building Council has warned that the every building on the planet must be net-zero in its energy footprint by 2050 if the Paris goal of keeping global warming below 2ºC is to be met.

COMMENT: Canada Must Balance the Climate Finance Books Between Adaptation and Mitigation