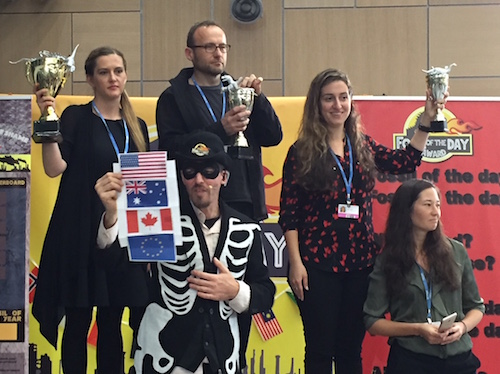 Canada received a shared Fossil of the Day Award from Climate Action Network-International on Saturday, along with the United States, Australia, and the European Union, for slowing down funding to developing countries to deal with the unforeseeable, uncontrollable impacts of climate change.

In a year of devastating storms and other climate impacts, and with a Pacific island nation chairing the annual United Nations climate conference for the first time, there is still a great deal of determination in Bonn to make this COP the one that makes progress on loss and damage. It’s a discussion that has been on hold for four years, since delegates to COP 19 in Warsaw parked it in a new international mechanism that has since received only limited financing or support.

While the 2013 decision produced “a mandate to ‘enhance’, ‘facilitate’, ‘mobilize’, and ‘secure’ finance for loss and damage,” CAN-International notes, Saturday’s four fossil recipients have been using their negotiating time to “twist, water down, and delete references to finance from the loss and damage decision text.” There had been some sense that Canada was showing a bit more openness on loss and damage than it has at past COPs, but that incremental progress wasn’t enough to avert a round of unwanted Fossil honours.

“Canada—we had hopes!” CAN-I writes. “At the beginning, you were so amazing in standing up for civil society and proposed newly-constructive ways to advance on this urgent matter. Why join with your disreputable [developed country] friends on the issue of finance? We expect in the future, that need you will to move closer to the good side. It’s nice here, we promise.”

As for the Trump administration delegation to the COP, “we would have thought that the U.S.—with its own territory of Puerto Rico still recovering from the devastation of Hurricane Maria—would, perhaps, have rediscovered at least one empathic bone in its body,” the Fossil citation states. “But apparently, this was waaaaay too much to ask for.”

The U.S. “aggressively led the charge to delete references to finance in the loss and damage text. Some might think this level of intervention was a bit rich coming from a country that has talked about pulling out of the Paris Agreement, but it looks like they plan on taking others down with them.”