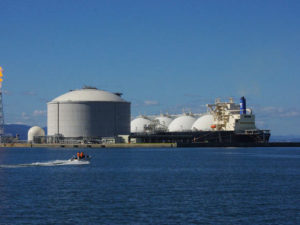 The project would see a new, 1,200-kilometre pipeline built to deliver gas from Alaska’s North Slope to Nikiski at Cook Inlet, on its south coast. The inlet is already the site of underwater gas wells and an aging seafloor gas collection system that threatens its wildlife.

The pipeline, JWN predicts, “could sew up the market in China for LNG that B.C. projects were hoping to capture.”

“Not only does the [Alaska] project have the financial backing of one of the world’s biggest banks, and a government equity partner,” the fossil news outlet reports, “it also has all the advantages B.C. boasted: An ocean of gas, short shipping distances to Asia, and a cold climate, which reduces the energy input costs for chilling natural gas to -160ºC” for shipping.

JWN makes a point of observing that Sinopec was among the investors that walked away from a proposed C$36-billion LNG liquefaction and shipping terminal on an environmentally and culturally sensitive site near Prince Rupert, B.C.—a decision blamed variously on soft market conditions for natural gas, and less than full-throated political support.

By contrast, observed gas consultant Jihad Traya, Alaska is prepared to put up cash to solidify its Chinese partners’ interest. “They’ve taken an equity stake,” he said. “It takes away all that agency issue and all that other discussion around LNG taxes and fiscal certainty.”

Traya expects the Trump administration will also find a way to relax a declared ban on using imported steel for pipelines built in the United States (already eased once, in favour of Calgary-based TransCanada Corporation’s revived Keystone XL line).

“I can assure you that the need for U.S.-made steel for this project is not going to matter,” the consultant said. “It’s going to be all Chinese steel, valves, and engineering.”

The lesson Traya and JWN draw for British Columbia: Its “government needs to get its head out of the sand and realize if it doesn’t provide fiscal certainty and potentially an equity stake in LNG, it doesn’t have a project.”

In other words: cash up front, and long-term tax breaks thereafter, or no LNG terminals. [Wouldn’t it be so much easier to invest in a just transition to renewable energy for fossil workers and communities? – Ed.]