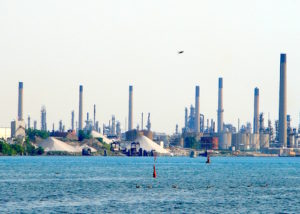 The much-abused environment around Sarnia and the First Nations community of Aamjiwnaang took another airborne hit this week, when “a chemical plant was evacuated after hydrogen sulphide leaked for an unknown period of time on Wednesday,” the National Observer and Toronto Star report.

Employees at Nova Chemicals “received written instructions to wear half and full respirator masks in certain areas when they arrived Wednesday morning,” a source told the outlet. By 4:45 PM, employees “were told to leave the building”.

It was unclear yesterday how long the leak had continued, but “the same source said staff were warned that ‘the leak happened last (Tuesday) night and (was) still not contained.’”

Hydrogen sulphide—so-called “sour” gas—smells like rotten eggs but in strong enough concentrations can cause death. This spring, it was reported that a bankrupt gas company in Alberta had put thousands of Calgarians at risk by failing to adequately contain the deadly gas.

Last month, the province of Ontario promised to at last get going on a long-promised investigation into health effects on communities from the concentration of industries processing highly toxic compounds in the international petrochemical corridor along the St. Clair River corridor. According to the Observer, “there are 57 polluters within 25 kilometres of the city registered with the Canadian and U.S. governments.”

The province made the promise, after “a joint investigation by the Star, Global News, National Observer, the Michener Awards Foundation and journalism schools at Ryerson and Concordia universities revealed a troubling pattern of secrecy and potentially toxic leaks in the Sarnia area,” the Observer recalls.