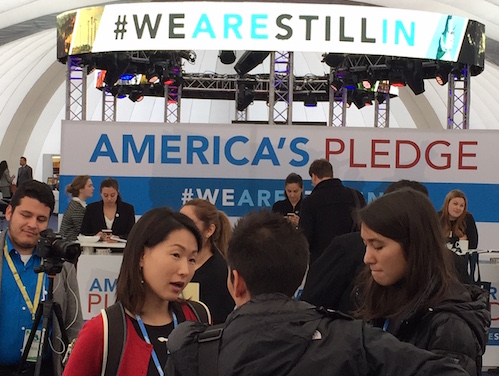 BONN—A largely untold story from the first week of this year’s United Nations climate summit (COP 23) has been the reality of steady, fairly productive technical work going on behind the scenes, while some observers search in vain for a big, controversial story angle that will catch the attention of audiences around the world.

That’s an echo of the tone last year at this time at the Bab Ighli complex in Marrakech, as COP 22 participants prepared for an onslaught of media planning to report the death of the Paris Agreement in the wake of the U.S. election. That story never materialized, as Marrakech delivered the loud, clear message that Paris and climate change are both bigger than any one country, or any one [head of state] [Twitter storm] [ego].

(You can tell the COP is under way. We’re back to square brackets.)

This year, the early questions have been pretty predictable: from the outside looking in, the worry is that a deliberately obstructive U.S. delegation will drag out debate or block agreement on key issues. So far, at least, that hasn’t happened. Last week, there was word the U.S. would send many of the same experienced climate negotiators who’ve attended past COPs, and that they would largely carry on with the work they’ve done at past conferences.

The bigger news hit yesterday, with the opening of a U.S. Climate Action Center where states, cities, a handful of U.S. senators, businesses, colleges and universities, and non-profits are delivering the message that #wearestillin—that the country is still committed to global climate action, even if the current occupant of the White House is not.

The Other U.S. Delegation

“The world is not standing still waiting for [Donald Trump] to come to his senses on responding to the threats posed by climate change,” Alden Meyer, director of strategy and policy at the Union of Concerned Scientists, told a news conference earlier today.

“Fortunately, they don’t have to. Local and state leaders, businesses, union members, environmentalists, and others in the U.S. are working together to address climate change in smart ways that will create and sustain good jobs in their communities. Their message to the world is clear: ‘we are still in,’ no matter what Donald Trump says or does.”

ECO, the daily newsletter produced onsite by Climate Action Network-International (CAN-I), went so far Thursday as to welcome a new delegation to this year’s COP.

“The delegation represents a country whose people are deeply committed to climate action. A country with universities, businesses, cities, and states that are pushing forward with plans to achieve bold climate targets like 100% renewable energy. A country that believes in science, respect, and the importance of the global community,” the newsletter stated. “Meet the U.S. People’s Delegation, a delegation of climate activists and community leaders from across the United States who have come to COP23 to represent the true spirit of the nation and to push for bold climate action that goes above and beyond the Paris Agreement.”

Days before, news broke in Brussels that California Governor Jerry Brown and European Climate Commissioner Miguel Arias Cañete had reached a deal to coordinate their carbon markets and cooperate on zero-carbon transportation. “The EU and California are natural partners in the fight against climate change, and have been pioneers in the early years of carbon markets and clean mobility,” said Cañete. “Today we agreed to strengthen our cooperation so that we remain leaders in these areas—both of which will be key for achieving the goals of the Paris Agreement.”

“We are truly facing a challenge unprecedented in human history,” Brown added. “If we come together and we see the truth of our situation, we can overcome it. We’ve fought great battles before, and I hope that the European Union and California will be able to inspire the rest of the world.”

ECO’s lead story today sums up negotiations so far on the process for countries to move farther, faster in their climate response in the years remaining before 2020.

“Delivering on promises of action and support in the pre-2020 period is not only fundamental to maintain trust among Parties (though it does that as well); to limiting the severity of growing climate impacts (yep, it does that too); or making it easier to increase ambition post-2020 (are you getting that this makes sense on many levels yet?),” ECO notes. “Without ambitious action now (we all know what ‘now’ means, right?), we cannot keep global temperature rise to 1.5°C or well below 2°C,” the goals built into the Paris deal.

At the moment, though, CAN-I warns that developed countries are blocking progress on pre-2020 action, awarding them top (dis)honours in yesterday’s Fossil of the Day award. “This year’s extreme weather events, which devastated communities across the world, show the urgent need for action now—we can’t only have talk until 2020,” the award citation stated. “This means developed countries need to also fulfil their previous commitments, including those on finance, which help poorer countries take action.”

Many of the key negotiating blocs onsite—including the Alliance of Small Island States (AOSIS), the Least-Developed Countries (LDC) Group, the Africa Group, the Alliance of Independent of Latin America and Caribbean (AILAC), and the Group of 77 developing countries—are also pointing out that the first COP ever chaired by a Pacific island country can’t conclude without decisive progress on loss and damage. Despite a cascade of front-line climate impacts, developing and vulnerable countries have been waiting four years for action on the Warsaw International Mechanism, a process countries adopted at COP 19 to address unavoidable climate-related disasters to which it is impossible for affected countries to adapt.

At the level of process where the COP generally operates, a push is on to make loss and damage a permanent topic for the UN working groups responsible for implementing and overseeing global climate action, and to build the topic into the various planning processes stemming from the Paris deal. But it’s also “time to move beyond the mere building of knowledge and collaboration, and towards mobilizing much needed finance and action on the ground to address loss and damage,” ECO notes. There are calls for a two-year process to generate billions of dollars per year, through “innovative and fair sources” like a fossil fuel levy, to deliver the funding countries need.

One of those creative options was brought forward by a group of organizations and advocates convened by Stamp Out Poverty. In a release yesterday, the UK-based group introduced the concept of a Climate Damages Tax, described as “an equitable fossil fuel extraction charge” on fossil producers “to pay for the damage and costs caused by climate change when these products are burnt.” The tax could be introduced nationally, regionally, or internationally, with the proceeds directed to climate finance initiatives.

A Faster Transition Off Fossil Fuels

From a couple of different angles, Bonn participants are trying to shape the negotiations to incorporate strategies for speeding up the transition away from the fossil fuel economy at the root of the climate crisis.

On Climate Home News, staff scientists Georgia Piggot and Peter Erickson of the Stockholm Environment Institute point to the inevitable need to attack fossil fuel production from the supply side, rather than leaving it to consumer interest and renewable energy options to gradually erode demand.

“Oil, gas and coal production have long been ignored in global climate talks, largely to avoid conflict between fossil fuel-producing nations and the rest of the world,” they write. But while negotiators managed to finalize the Paris Agreement text without once including the words “fossil fuels”, Piggot and Erickson say, “this silence can’t continue forever. Evidence shows that we need to slow the development of fossil fuel resources to meet the Agreement’s goals. It’s time for world leaders—through the UN Framework Convention on Climate Change (UNFCCC)—to admit the problem and work on the solution.”

The opportunity for that breakthrough, they suggest, is the development of the detailed rulebook for shifting the Paris deal from broad principle to practical action. “If these hard-fought rules for implementing Paris do not consider fossil fuel production now, it is unlikely that countries will revise them any time soon.”

Another key issue, recognized in the preamble but not the operational text of the agreement, is the need to build a “just transition” for workers and communities whose livelihoods currently depend on fossil production.

“Building wider buy-in for a just transition and bringing it to the centre of Paris Agreement is one of the quickest ways to create momentum and grassroot support for earlier action and faster greenhouse gas reductions,” Climate Action Network-Canada noted in yesterday’s edition of its onsite daily, CAN-Raction. “And the next year will be a particularly important moment for leadership on just tradition, with COP24 set to convene in Katowice, in the heart of Poland’s coal-producing region. But so far, of the nearly 200 countries that have signed on to the Paris Agreement, only South Africa has included just transition in its national greenhouse gas reduction plan, or Nationally Determined Contribution (NDC).” [Disclosure: The Energy Mix Curator Mitchell Beer is in Bonn producing CAN-Raction.]

But if there’s one reliable constant at UN climate negotiations, it’s the presence of fossil lobbyists doing what they can to slow the process down. Last week, in the lead-up to Bonn, The Guardian was out with an analysis of fossil influence over key aspects of the COP process.

“Global negotiations seeking to implement the Paris agreement have been captured by corporate interests and are being undermined by powerful forces that benefit from exacerbating climate change,” the paper stated, citing a report co-authored by Boston-based Corporate Accountability.

“The report argues that as a result of this corporate influence, outcomes of negotiations so far have been skewed to favour the interests of the world’s biggest corporate polluters over those of the majority of the world’s population that live in the developing world,” in areas as varied as finance, agriculture, and technology.

Geo-engineering can work – if the world wants it