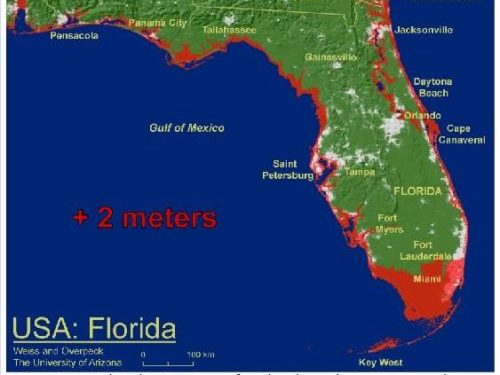 Vanishing U.S. cities and vastly more severe storm victims are appearing as a realistic future scenario, as researchers flesh out the details of a world where average global warming breaks through the Paris Agreement target of 2.0ºC above pre-industrial levels this century.
Breaching 2.0ºC is made increasingly likely by the continuing upward trends of greenhouse gas concentrations in the atmosphere. With the release of one recent report by the United Nations Environmental Programme (UNEP), Climate News Network concluded last month that “governments should accept that we shall probably be living in a world 3.0ºC warmer than it is today by the end of this century.”
That degree of warming, the Guardian writes, “would ultimately lock in irreversible sea level rises of perhaps two metres. Cities from Shanghai to Alexandria, and Rio to Osaka are among the worst affected. Miami would be inundated—as would the entire bottom third of the U.S. state of Florida.” A good deal of metro Vancouver—including its international airport—would also be awash.
“At least 275 million city dwellers live in vulnerable areas,” the outlet reports.
Meanwhile, the non-partisan United States Congressional Budget Office warned that country’s federal governmentin a report that it needs to prepare for an eight-fold increase in the number of people “substantially affected” annually by hurricanes along its Gulf of Mexico and Atlantic coasts.
The number now averages about 1.2 million people each year. By 2075, it will be at least 10 million, the study estimates. Hurricanes will annually do US$75 billion in damage in the United States—half of that in
Florida, where Gov. Rick Scott has famously banned references to climate change in official government publications.
The study’s authors attribute 45% of the forecast increase in damage—or $35 billion a year—to climate change, the rest to continuing coastal development.