‘Prevention is Better Than Cure’, as Delayed Climate Action Costs Millions Their Health 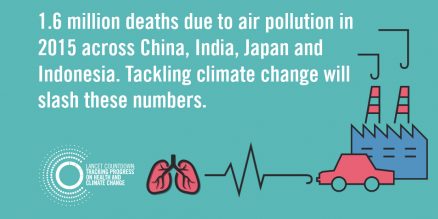 The world’s “delayed response” to climate change has already condemned millions of people to “unequivocal and potentially irreversible” health damage, a collaboration of 24 academic institutions and intergovernmental organizations convened by The Lancet has found.

The Lancet Countdown tracks 40 indicators for progress on 10 recommendations from a previous Lancet task force, which issued a report two years ago on preserving public health in a time of climate change. It’s one of a number of studies timed to appear as international delegates gather this week in Bonn to discuss implementation of the 2015 Paris Climate Agreement, warning them of the consequences of failure.

In advance of the Paris Summit, the Lancet Commission on Health and Climate Change concluded that “anthropogenic climate change threatens to undermine the past 50 years of gains in public health, and conversely, a comprehensive response to climate change could be ‘the greatest global health opportunity of the 21st century,’” the update recalls.

Two years later, the follow-up report finds some signs of progress, but not enough to reverse a quarter-century decline in public health resulting from the international community’s feckless response to observed climate change and ongoing reliance on polluting fossil fuels.

“The evidence is clear,” the Lancet’s researchers write, “that exposure to more frequent and intense heat waves is increasing, with an estimated 125 million additional vulnerable adults exposed to heat waves between 2000 and 2016.” Quite apart from the health impact of persistent elevated temperatures, they add, the exposures “have resulted in an estimated reduction of 5.3% in outdoor manual labour productivity worldwide.”

At the same time, “the frequency of weather­related disasters has increased by 46% since 2000,” and “the total value of economic losses resulting from climate­related events has been increasing since 1990, totalling US$129 billion in 2016. 99% of these economic losses in low­income countries were uninsured.”

A warming planet is also contributing to a growing capacity for the transmission of dengue fever and other mosquito-borne infectious diseases. Meanwhile, the continued use of fossil fuels in transportation and power generation has increased many populations’ exposure to highly toxic fine particulate matter in the air. “71% of the 2,971 cities in the WHO air pollution database,” Lancet writes, “exceed guideline annual PM exposure.”

The downward trend is of long standing. “Since the UN Framework Convention on Climate Change (UNFCCC) commenced global efforts to tackle climate change in 1992,” the researchers report, “most of the indicators tracked by the Lancet Countdown have either shown limited progress, particularly with regards to adaptation, or moved in the wrong direction, particularly in relation to mitigation. Most fundamentally, carbon emissions and global temperatures have continued to increase.”

Despite the Paris Agreement—since renounced by the Trump administration—and “some recent progress in strengthening health resilience to climate impacts,” the ongoing decline in key indicators bodes poorly for humanity.

“An analogy to human physiology is useful here,” Lancet’s experts offer. “The human body can adapt to insults caused by minor illness with relative ease. However, when disease steadily worsens, positive feedback cycles and limits to adaptation are quickly reached. This is particularly true when the failure of one system affects the function of another, as is the case for multi-organ system failure or when the body has already been weakened through repeated diseases or exposures.

“The same is true for the health consequences of climate change. It acts as a threat multiplier, compounding many of the issues communities already face and strengthening the correlation between multiple health risks, making them more likely to occur simultaneously. Indeed, climate change is not a single­system disease but instead often compounds existing pressures on housing, food and water security, poverty, and many determinants of good health.

“Adaptation has limits, and prevention is better than cure to avert potentially irreversible effects of climate change.”

A similar message came last week from the Environmental Justice Foundation (EJF). It cited senior U.S. military and security experts who warned European nations that “the number of climate refugees will dwarf those who have fled the Syrian conflict, bringing huge challenges” to the continent.

“If Europe thinks they have a problem with migration today,” retired brigadier general Stephen Cheney told the EJF, “wait 20 years. See what happens when climate change drives people out of Africa—the Sahel [sub-Saharan area] especially—and we’re talking now not just one or two million, but 10 or 20 [million]. They are not going to south Africa, they are going across the Mediterranean.”

A round-up of opinion among international military strategists a year ago came to a similarly bleak conclusion. “Climate change is the greatest security threat of the 21st century,” Maj. Gen. Munir Muniruzzaman, former military advisor to the president of Bangladesh and chair of the Global Military Advisory Council on Climate Change, said at the time.

The EJF called on Bonn delegates “to agree a new legal framework to protect climate refugees.”

The Lancet, while noting approvingly the breakout of renewable energy since 2015, and deeming that the post-carbon “transition has become inevitable,” nonetheless observed that “1.2 billion people still [do] not have access to electricity, and 2.7 billion people were relying on the burning of unsafe and unsustainable solid fuels,” for light and heat.

U.S. Diplomats Buck Their Own Science to Sell Fossils as ‘Answer to Climate Change’