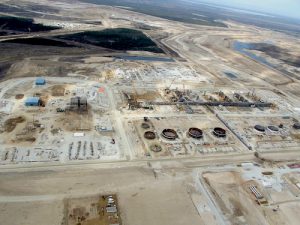 An international report produced in the lead-up to the 2017 United Nations climate change conference in Bonn (COP 23) shows Canada stalling out in its efforts to rein in its greenhouse gas emissions, while U.S output continues to drop, though slowly.

“It’s a bit of a paradox here,” said Angel Gurria, secretary-general of the Organization for Economic Co-operation and Development, during an Ottawa visit this week. “In Canada, you have a situation where you have a very strong political will to reduce, but effectively it has not gone on the planned road.” In the U.S., meanwhile, “you have a government that has pulled out of the (Paris) Agreement, but in the United States you are having a reduction in emissions.”

Gurria praised Canada’s contribution to the political push to seal the Paris agreement in 2015, but noted that the country’s tangible progress hasn’t matched its aspirational goals.

“You have here a very proactive and decisive leadership moving in the direction of reduction of emissions, and a very active participant in the Paris Agreement and a very active participant in the whole of the world’s move,” he told an audience at the University of Toronto. “While at the same time, the local situation is showing that the speed of reduction is not as fast as one would have wanted.”

With emissions down 2% from 2005 levels, when they should have fallen 17% by now to keep pace with the country’s international carbon commitments, “you basically are on a path where, by 2030, you may not be able to get to the target.

In a separate interview responding to the United Nations gap report, which tracked a shortfall in the international effort to meet the Paris agreement targets, Environment and Climate Change Minister Catherine McKenna would not commit to increasing Canada’s climate ambition by 2020. “We’ve come forward with our targets now and we have a plan to meet them and we need to implement them,” she told The Canadian Press. “We’re always looking at how we can accelerate actions, but we need to be doing that in lockstep with the provinces and territories.”

CP points to a 40-megatonne gap between Canada’s Harper-era carbon target for 2030 and the commitments in the pan-Canadian climate plan, noting that the plan is “at least the fourth time Canada has set an emissions target and thus far has never met one of them.”

Climate Action Network Canada Executive Director Catherine Abreu said it’s time for Canada to “get real about having that really tricky conversation” on closing the gap. “A huge part of that is because we’re still planning to develop fossil fuel resources in this country,” she told CP.

For Canada’s National Energy Board is concerned, “getting real” means preparing for at least another million barrels per day of in situ tar sands/oil sands production by 2040, JWN Energy reports. And as far as the infrastructure upgrades that would help the country reduce its energy use and greenhouse gas emissions, CP reports [via iPolitics/subs req’d] that the government will shift $2 billion of its investment commitment from this year to next, after projects rolled out more slowly than expected.