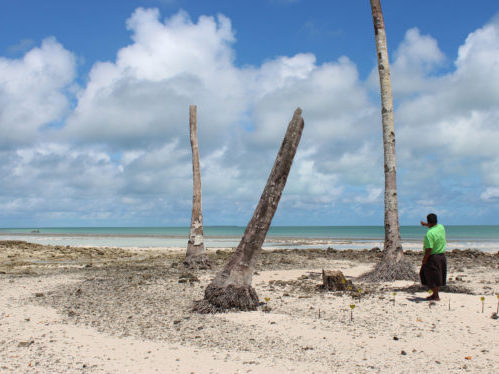 New Zealand may institute a special visa category for climate refugees, its Green Party leader and minister for climate change revealed in a radio interview.

Its introduction would deliver on a Green Party campaign promise, the Guardian reports. The pre-election commitment was limited to an initial 100 climate change visas, but the party “has also proposed increasing New Zealand’s overall refugee quota from 750 each year to 4,000 places over six years.”

The move could place New Zealand on a sharply different course from its larger neighbour, Australia. That country has confined hundreds of climate refugees who attempted to reach it by boat in an internment camp on a remote Pacific island.

A visa category for climate migrants would also fill a gap in New Zealand law revealed when an immigration tribunal rejected refugee claims submitted by two families from Tuvalu.

The families pointed to “rising sea levels, lack of access to clean and sanitary drinking water, and Tuvalu’s high unemployment rate as reasons for seeking asylum,” the Guardian reports. They were denied entry, however, because they did not meet the criteria for asylum specified in 1951 by the United Nations Convention on Refugees, of “being persecuted by race, religion, nationality, or by membership in a political or religious group.”

Tuvalu Prime Minister Enele Sopoaga has denounced wealthy industrialized countries as “vultures” for their neglect of small island states affected by climate change. The Potsdam Institute for Climate Impact Research and the Asian Development Bank have warned that climate change may force as may as one billion people to migrate by 2100. The largest number will be in the Asia-Pacific region shared by New Zealand and Australia.