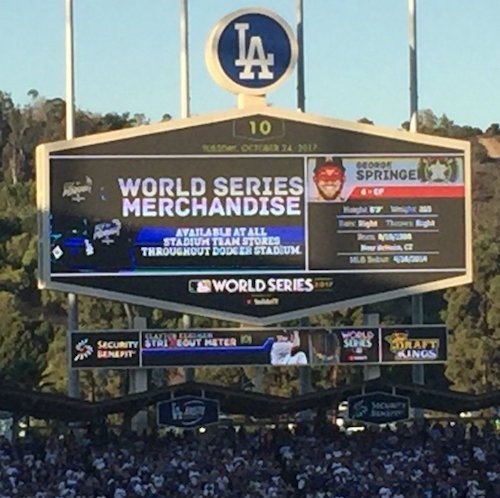 The World Series of baseball kicked off last week amid a fall heat wave so torrid that the scoreboard at Dodger Stadium in Los Angeles couldn’t show the temperature.

With the thermometer above 100°F, the photo snapped by Los Angeles Times sports reporter Bill Shaikin showed a ‘10’ in the spot where the board displays the normally two-digit temperature.

“It was, according to Major League Baseball historian John Thorn, the hottest World Series game in more than 40 years by a 20-plus-degree margin,” the Washington Post reports. “The official temperature at game time was 103°, according to Major League Baseball. Only four other World Series games in history were warmer than 90°.”

“So Cal heat didn’t just break all the records, it utterly crushed them,” tweeted 350.org co-founder Bill McKibben. “With a record this long, this is statistically unnerving.”

“Earlier in the afternoon, the mercury had peaked at 104° in downtown Los Angeles, shattering the record of 99° set in 1909,” the Post notes. “It joined many other locations in Southern California that obliterated long-standing records for the date.”

The Post’s Philip Bump acknowledges that “one warm baseball game doesn’t prove that the world is warming, of course. But it’s also interesting that the teams playing in the Series are from Los Angeles and Houston.” While much of the recent wildfire activity in California has been in the northern part of the state, there were at least four fires burning in an arc around LA at game time.

And “Houston, of course, is still recovering from Hurricane Harvey, which deluged the city and the Gulf Coast with more rain than has ever before been recorded in the United States from a single weather event.”

Bump’s coverage pivots from the Houston Astros-Los Angeles Dodgers game to recent news on the anticipated economic and human costs of climate change.