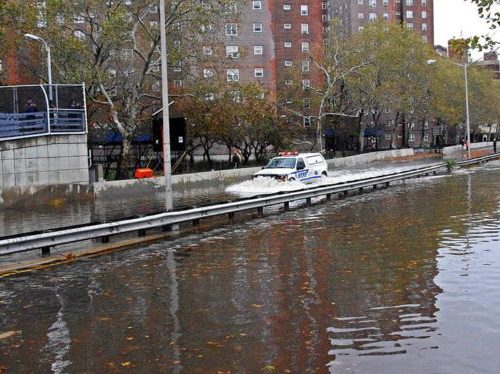 Sunday’s five-year anniversary of the day Superstorm Sandy ripped ashore in New York, New Jersey, and Connecticut prompted a small flurry of news reports on the climate resilience efforts the region has seen since.

The storm killed dozens of people and caused US$19 billion worth of damage in New York City alone. The prognosis half a decade later: preparing for the next big storm is more complicated than it might seem.

From the Caribbean to the U.S. Northeast, Sandy capped months of severe weather by taking out grid power for 8.5 million people in 21 states, Greentech recalls. That “unprecedented” experience led states to look at their resilience with fresh eyes.

“The whole hardening arena becomes a lot more complicated and a lot more important going forward,” Miki Deric, Accenture’s managing director of utilities, transmission and distribution, told reporter Emma Foehringer Merchant. “With the increased frequency of these large events, there’s a constant reminder that there’s a need to do this.”

Since then, northeastern states have built 35 microgrids, representing 33% of the country’s 2,045 megawatts of capacity. Connecticut was initially the fastest to respond, earmarking most of the $56 million the region allocated to microgrid development in 2013, the year after the storm. That total rose to $84 million 2014, the same year New York announced a prize competition for community microgrids. GTM Research analyst Colleen Metelitsa expects three to five of those projects to be built between 2018 and 2020, along with others inspired by Sandy.

“A lot of money has been allocated, but not many of the microgrids have actually been built with post-Sandy funding,” she said. In states like Connecticut, “a lot of these funds are still there, and a lot of those projects even from round one still haven’t been commissioned. A lot of them are moving forward, but it’s a slower process than everyone has been expecting.”

In addition to adopting a microgrid strategy that will allow segments within cities and states to “island” from the main power system in a severe storm, Greentech says utility planners are also addressing overall system vulnerability: hardening substations and generating stations, moving some equipment underground, installing submersible transformers and network protectors, and reducing the number of customers who can be affected by a single outage to about 500.

The urgency of the work, and of the practical experience it’s generating, is only underscored by the wave of severe storms over the last couple of months.

“They have a difficult task ahead of them, particularly the islands,” said Richard Mroz, president of the New Jersey Board of Public Utilities. “There are some things you just can’t prepare for, but I think it’s incumbent on the industry and regulators to prepare and test their systems [and] think about what worst case scenarios might be.”

Another persistent issue triggered by severe storms from New York to Houston to Florida is where, how, and whether to rebuild existing homes and infrastructure in known flood zones. InsideClimate News points to Brooklyn’s Red Hook neighbourhood, an isolated southwestern peninsula jutting out into New York’s Upper Bay, as an example.

“As the Sandy-whipped water spilled over bulkheads along the shore, Van Brunt Street, Red Hook’s main thoroughfare, became a raging river, and nearly every other block in the neighbourhood was inundated,” ICN recalls, in an article republished from The Bridge.

“Basements and cars were flooded out, and water even spat up from the sewers. The Fairway supermarket that sits inside a brick and wrought iron Civil War-era dock building was ruined, and wouldn’t reopen for nearly six months. The most lasting damage was done to the Red Hook Houses, a cluster of subsidized rentals where more than half of the neighborhood’s 10,000 residents live. The buildings lost access to power and clean water for weeks and were left ridden with mould by the floodwaters.”

But five years later, “homes and businesses have largely been repaired, and new residents, far from being scared off by the storm, are flooding in,” writes environment specialist Bryan Walsh. “New condos are emerging on the neighbourhood’s waterfront—so much so that, in the third quarter of this year, Red Hook became Brooklyn’s priciest neighbourhood based on new home sales.”

Emergency infrastructure is also on the rise, beginning with an interim flood wall that will eventually integrate with a $100-million flood protection system.

But “for all New York is doing, the city isn’t keeping up with the larger and long-term threat of sea level rise—and by supporting continued development along the waterfront, including in Sandy-hit neighbourhoods like Red Hook, New York is actually accentuating the risk that will come with ever-worsening floods,” Walsh writes. “The truth is that with the seas around New York pegged to rise by feet by the end of the century, there may be no truly long-term future for waterfront neighborhoods like Red Hook—at least, no future that resembles the present.”

“The only answer is going to be to plan for the inevitable on sea level rise, and that could mean retreat from the shoreline,” said Queens College coastal geography specialist Nicolas Coch. “But no one wants to think about that.”