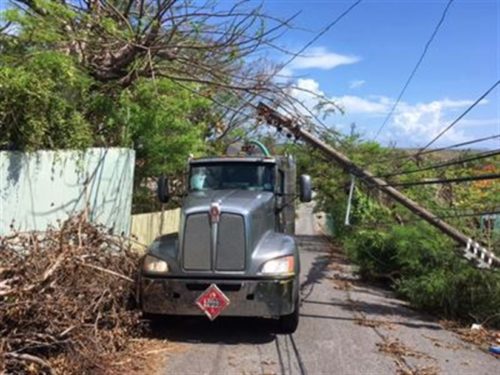 The Puerto Rico Electric Power Authority (PREPA) has cancelled its US$300-million grid reconstruction project with Whitefish Energy, the two-person firm from Montana that just happens to be based in U.S. Interior Secretary Ryan Zinke’s home town and, as it turns out, employed one of his sons over the summer.

“As a result of the information that has been revealed and the need to protect the public interest, as governor I am asking the power authority to cancel the Whitefish contract immediately,” Governor Ricardo Roselló said in a Sunday morning news conference. The Washington Post says Roselló didn’t specify what new information had come to light, but “critics in the electric power industry, Congress, and the Federal Emergency Management Agency raised questions about whether the company…was well equipped to respond to the hurricane damage.”

“The best thing that can happen is its cancellation,” said PREPA Executive Director Ricardo Ramos. “But the investigations will continue.”

Nearly six weeks after Hurricane Maria slammed into the island territory—with about 80% of the people on Puerto Rico’s main island still in the dark, and just two days ahead of a hearing of the U.S. Senate Homeland and Governmental Affairs Committee—Roselló said he would activate the mutual aid agreements with mainland utilities that are the usual first response to a grid disaster of this magnitude.

With both PREPA and Puerto Rico itself in bankruptcy, Roselló and Congress have been sparring back and forth about authority and oversight over the post-Maria reconstruction, the Post notes. With a Congressionally-mandated oversight board in place, the governor and many other Puerto Ricans have “complained that the federal government plays a colonial role in the territory”, but Congress still sees the board playing an essential role.

The Post article contains new details on Whitefish Energy, a firm that “has focused mostly on unsuccessfully trying to set up a plant to manufacture transformers”, and “is backed by HBC Investments’ partners fund, a Dallas-based private equity firm whose members have a long record of financial support for the Republican Party.”

Utility veterans have questioned PREPA’s decision to bring in a private contractor, rather than tapping into the more conventional mutual aid system. And “many in the industry have suggested that Whitefish Energy’s pay scales—as high as $462 an hour—were much higher than is typical, even in an emergency such as the one facing Puerto Rico,” the paper reports.

“While the conditions in Puerto Rico are difficult and lineman work is dangerous, there are companies and agencies seeking to do the work for substantially less, according to people familiar with figures from four companies from the mainland.”

The Whitefish contract with PREPA also stipulates that pay rates and other terms can’t be audited by the utility, the Puerto Rico government, or FEMA. FEMA said Friday it hadn’t approved the contract, adding that it had “significant concerns with how PREPA procured this contract and has not confirmed whether the contract prices are reasonable.” Ramos said he had learned about the contract clauses from media reports.