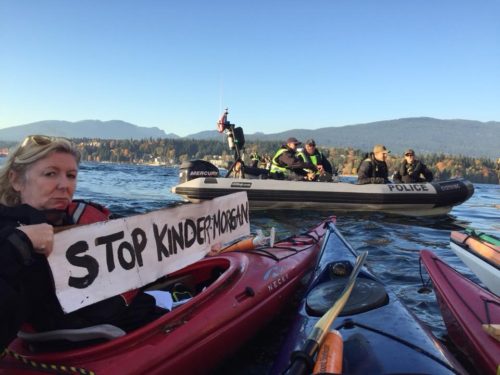 Kayaktivists were on the water in Vancouver harbour Saturday, trying to disrupt construction of Kinder Morgan’s Westridge pipeline terminal in Burnaby.

“There’s about 100 people in boats and kayaks who are going to go over, and many of them said they’re going to cross the barrier line and they’ve been informed they will be arrested,” Stand.Earth Campaign Director Karen Mahon said Saturday morning.

In the end, “five kayakers were arrested by the RCMP while First Nations leaders and support crews rallied on land,” National Observer reports. “The disruptions follow a warning from Kinder Morgan that it is facing delays and losses of more than C$90 million per month because of its struggles to get permits from the city of Burnaby.”

“American billionaires come here and poison our waters,” said Tsleil-Waututh Elder Amy George (Ta’ah). “You’re not wanted here, you’re not welcome here.” She added, “how do you dare claim this is private property?”

“The Prime Minister can’t say he’s embracing the United Nations Declaration on the Rights of Indigenous Peoples on one hand, and then on the other hand support Kinder Morgan’s risky pipeline and tanker project,” added Chief Bob Chamberlin, vice president of the Union of B.C. Indian Chiefs.

Kinder Morgan told National Observer that “construction work at Westridge Marine Terminal didn’t stop today. We just adjusted our activities for the safety of all.” But the company wasn’t quite so sanguine about continuing opposition from Burnaby City Council. Burnaby is accusing the U.S.-based pipeliner of “disrespecting municipal regulations,” the Seeking Alpha investment site notes, after the company asked the National Energy Board to issue approvals the city had withheld and set up an “expedited determination” process to prevent future delays.

“After many months of working in good faith to obtain municipal permits from the City of Burnaby without success, we are asking the NEB to allow us to go ahead with work,” the company states on its website. “The city’s failure to act in a timely manner raises serious issues of jurisdiction that we are compelled to bring to the board’s attention.”

That led to an NEB affidavit in which Kinder Morgan Canada Vice President Michael Davies said each month of delay “directly costs the company up to $35 million and deprives it of more than $90 million in revenue,” Reuters reports.

On Seeking Alpha. City Manager Lambert S.H. Chu explained that “because of the size and scope of Kinder Morgan’s project, these approvals take time.” While Burnaby Mayor Derek Corrigan “is a vocal opponent of the pipeline project and has pledged civil disobedience to help disrupt construction,” the investment site adds, he “says he has no influence on the speed of the municipal regulatory process.”

While the protests, legal claims, and counter-claims continue to play out, Kinder Morgan’s Davies is admitting the project itself could be in jeopardy. “A delay of an indeterminate nature will create uncertainty regarding the project’s future and the in-service date of the project, potentially resulting in the failure of the project,” he stated.

“In the affidavit, he said oil shipper customers could seek alternatives for committed volumes of more than 700,000 barrels a day should the company miss its planned startup date of 2019,” the Globe and Mail notes. “Data suggest that’s already happening,” with Canada’s crude-by-rail shipments steadily increasing month by month, and “many of the [Kinder Morgan] project’s backers are also supporters of TransCanada’s rival Keystone XL pipeline.”

Electric bus was killed off 100 years ago