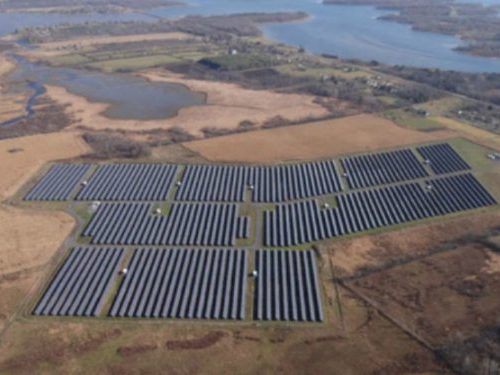 In a move the company might come to regret, Calgary-based TransCanada Corporation has announced a C$540-million deal to dump its 76 megawatts of solar capacity and invest the proceeds in new natural gas capital projects.

The sale to a subsidiary of Axium Infrastructure Canada “moves against the industry trend of investing more in renewables,” The Canadian Press notes.

“It looks like TransCanada has given up on even pretending to take climate change seriously,” said Greenpeace Canada Senior Energy Strategist Keith Stewart.

“The company is doubling down on a sunset industry because oil and gas is what it knows,” he added. “But long-term investors should recognize that selling your solar farms to finance pipelines is the equivalent of cancelling your Netflix subscription so you can get a premium membership at Blockbuster.”

“This is the first big example of an energy company in Canada pulling back from renewable energy investments, and maybe focusing in on their core business,” added Warren Mabee, director of the Queen University Institute for Energy and Environmental Policy. “At a time when more and more governments and more and more investment groups are looking to green their portfolio, I think that could hurt them.”

The deal “leaves TransCanada’s renewable portfolio with 365 megawatts of wind power through its partial ownership of Cartier Wind, after the company sold its hydropower and wind generation assets in the U.S. earlier this year to help fund its US$13-billion takeover of Columbia Pipeline Group,” CP notes.

TransCanada’s investment strategy (or lack thereof) stands in stark contrast to Canada’s other big pipeliner, Enbridge, which “has been adding to its renewable portfolio while also making big acquisitions on the pipeline front,” the news agency adds. The company has taken 50% shares in a 497-MW wind project in Germany and an offshore wind company in France, bought the 249-MW, US$400-million Chapman Ranch wind farm in Texas, and is a partner in a new 400-MW wind project in the UK.