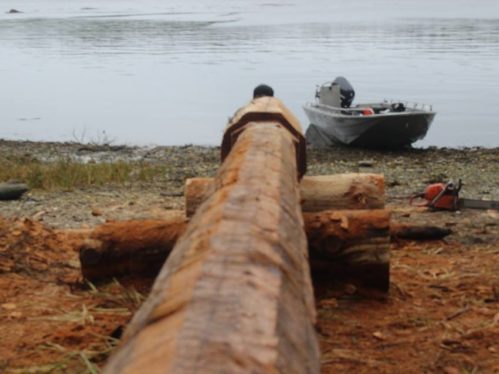 The Tsimshian First Nation is celebrating the cancellation of the C$36-billion Pacific NorthWest liquefied natural gas megaproject, and asserting its stewardship over the territory where a major LNG terminal would have been built, by raising a new totem pole on Lelu Island in northwestern British Columbia.

The community “made a stand to show Canada that our blood is still on the land, and that we are here forever,” said Gwishawaal (Ken Lawson), a house leader of the Gitwilgyoots, one of the nine allied tribes of the coast Tsimshian.

While Malaysian state fossil company Petronas cited market conditions when it cancelled the project in July, it was also a victory “for the people of the nation of the country,” Gwishawaal said. “I don’t have hard feelings against anyone. This was just something we had to do. It’s the name I took to protect the land, the air, the water. I came to do a job, and we did it.”

During the totem pole raising, a Prince Rupert Port Authority (PRPA) vessel patrolled nearby, “a reminder that who the land belongs to remains a point of contention,” CBC reports.