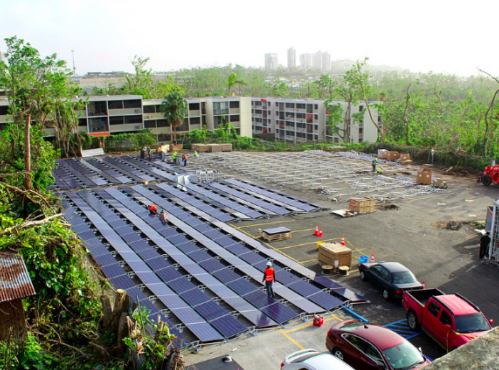 Medical equipment and lights are back in operation at the Hospital del Niño (Children’s Hospital) in San Juan, Puerto Rico, courtesy of a solar panel and battery array installed by Tesla.

“The hospital’s new system allows it to generate all the energy it needs,” U.S. National Public Radio reports, citing El Nuevo Día. “The facility has 35 permanent residents with chronic conditions; it also offers services to some 3,000 young patients, the newspaper says. As for who is paying for the power system, the head of the hospital tells Nuevo Día that for now, it’s a donation—and that after the energy crisis is over, a deal could make it permanent.”

“Grateful to support the recovery of Puerto Rico with @ricardorossello,” Tesla tweeted this week. “A major contribution of @Tesla to the Hospital del Niño,” the territory’s governor tweeted back.

“The beauty of such a set-up is that the hospital can generate power when the sun is shining and reserve it for later use when the sun is not out—or, say, to help recover from a weather disaster,” EcoWatch notes. In addition to the hospital installation, “thanks to solar power, a 40-acre plant farm in Barranquitas in central Puerto Rico was able to slowly rebuild.”

But the hard-hit island still has a long way to go to recover from the devastation wrought by Hurricane Maria last month. “The news of restoring permanent power at the hospital comes as millions of people in Puerto Rico continue to rely on generators for electricity,” NPR notes. “As of Wednesday morning, the Electric Power Authority reported that its power service was at 25%.”

“Clean and affordable energy for all is the mission of our company. It is what we believe in and it is what drives us every day,” said company founder Christoph Ostermann. “As fellow human beings, it is our duty to stand firmly with the people of Puerto Rico and do everything possible to help start the rebuilding process. From my perspective, there is a clear connection between our mission to support humanity during a climate disaster and our mission to fight climate change.”

While a company linked to U.S. Interior Secretary Ryan Zinke works its way through a politically suspect contract to rebuild the territory’s bankrupt power grid, CleanTechnica notes that Puerto Rico “is considered an ideal candidate for a more distributed grid arrangement, with many small solar power plants feeding local microgrids fortified with battery storage to keep the electricity flowing after dark. Rather than the entire island depending on a conventional grid, the microgrids would be self-sufficient in the event of an emergency.”