U.S. Ambassador to Canada Believes ‘Both Sides’ on Climate Science 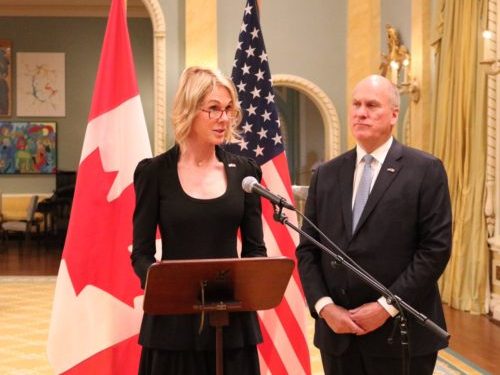 Newly-installed United States Ambassador to Canada Kelly Knight Craft set off alarms on all sides of the political spectrum this week when she stated she believes “both sides” of climate science.

“I think that both sides have their own results, from their studies, and I appreciate and I respect both sides of the science,” Knight Craft, spouse of a Kentucky coal baron and a top-ranked Republican donor, told the CBC’s Rosemary Barton in an interview.

For the record, there are no “both sides” to the overwhelming consensus among credible scientists that human emissions of a range of greenhouse gases are heating the planet and altering the climate equilibrium that has allowed human civilization to flourish in the last 10,000 years. Unfortunately, Knight Craft’s comments put Canadian media in the position of repeating the discredited false equivalency that puts 97%+ of published climate science on a par with fossil-funded climate denial.

The ambassador’s equivocal phrasing was strikingly reminiscent of wording that landed her boss, Donald Trump, in hot water in August. Then, in his response to a demonstration by white nationalists shouting Nazi slogans that devolved into a fatal attack on counter-demonstrators, Trump declared that “you also had some very fine people on both sides”.

When Trump first nominated Knight Craft in June, The Canadian Press described her as “a big-money political donor and philanthropist with personal ties to the coal industry”.

According to a profile on Vice News, Knight Craft and her husband Joseph Craft “cut a US$750,000 cheque for Future45, a political action committee that unleashed a series of brutal advertisements attacking [Trump’s Democratic rival] Hillary Clinton” during last year’s election campaign in the United States. The pair also contributed to Trump’s inaugural celebrations.

The couple’s estimated $1.4-billion net worth comes mainly from Joseph Craft’s position as CEO of Alliance Resource Partners, “a massive coal company that operates throughout Kentucky, West Virginia, and the surrounding states,” Vice notes. “The Crafts have supported pro-coal initiatives through the CoalPAC, which pushes pro-coal initiatives through campaign contributions; and Alliance Coal PAC, which is the political action committee for Craft’s company.”

Oceans could offer a wind-powered world