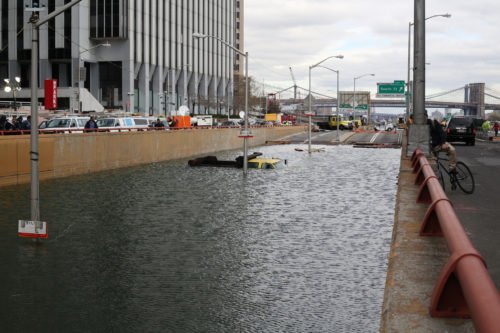 Floods above 2.25 metres in height—enough to inundate the first floor of a building—could hit New York City every five years by 2030-2045, even though such an event would only have been expected every 25 years between 1970 and 2005 and every 500 years in the 1800s, according to a new study in the Proceedings of the National Academy of Sciences.

“As we move from the modern time period into the future, we find that storms tend to become more intense, while simultaneously shifting somewhat eastward, away from New York City,” she said, based on storm surge modelling that accounted for the effects of a warming climate. “The bad news is that when sea level rise is added into the picture, it becomes clear that overall flood heights will become drastically worse in New York City in coming years.”

The study showed a wide range of possible impacts in the city and region, allowing for different IPCC models of future global warming and “deep uncertainty” about the future role of the Antarctic ice sheet in sea level rise.

But “the results show that flood heights in New York from 2080 to 2100 could be 1.4 metres above the average flood heights witnessed from 1970 to 2005, when an average is taken from all the scenarios of future sea level rise,” Carbon Brief notes. “And serious floods, which exceed more than 2.25 metres in height, could dramatically increase in frequency.”

Garner added that, “post-[Hurricane] Sandy, some infrastructure and planning is almost certainly trying to account for future flooding situations, but a flood of this magnitude in New York would certainly still have significant impacts for many aspects of the city.”

Bloomberg notes that the paper contained no specific recommendations for policy-makers.

“We hope this kind of study will provide information that people making those kinds of decisions can use,” Garner said. “We know that when Sandy hit in 2012, of course, subways, tunnels flooded, power was knocked out, parts of the city were just really devastated, so studies like this provide some warning….How are we going to protect our coastal infrastructure?”

Prof. Kevin Trenberth of the U.S. National Center for Atmospheric Research said the study was “very useful”, even though it left out impacts of high tides and mid-latitude storms, and implications for vulnerable communities like Hoboken, NJ. It also relied on uncertain data over the 300 years of storm activity it sought to project.

“The paper assesses coastal flood risk over the next three centuries, but these risks depend hugely on scenarios as to how factors such as emissions and population size change,” he told Carbon Brief.