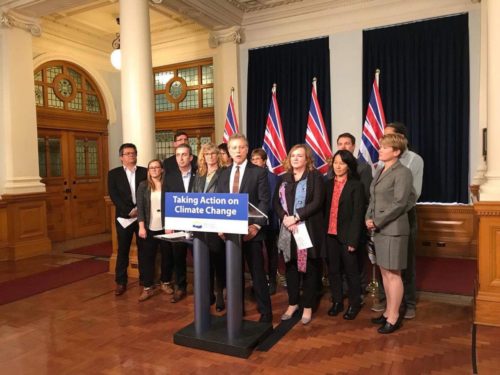 The panel has its work cut out for it. Its mission is to help B.C. Premier John Horgan’s government stickhandle some of the most explosive issues facing it in Canada’s third-most-populous province. Horgan’s New Democrats hold a razor-slim margin of power in the provincial legislature, due to a collaboration agreement with the Green Party’s three members.

And energy development dominates many of the items on the agenda: from his government’s withdrawal of its predecessor’s support for the expansion of the U.S.-owned Trans Mountain pipeline from Alberta through the province’s populous lower mainland, to whether to proceed with a multi-billion-dollar potential white elephant hydroelectric project in the northeastern Peace River region. The government has also pledged to reinvigorate British Columbia’s implementation of its climate goals, which languished under former Liberal premier Christy Clark.

British Columbia’s historically troubled relationship with First Nations communities—most of whom have never reached settlements with the colonial government for the use of their traditional territories—further complicates all those issues. The advisory panel includes Kathryn Teneese, chair of the Ktunaxa Nation, Aaron Sumexheltza, chief of the Lower Nicola Indian Band. and Gordon Planes, chief of the T’Sou-ke Nation.