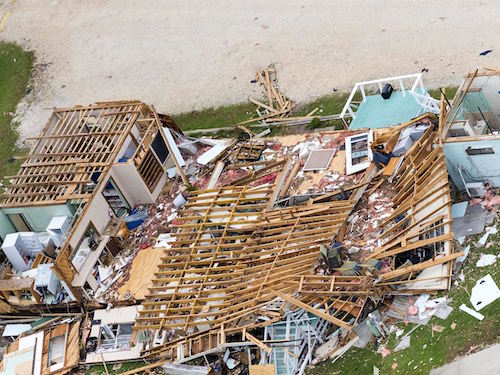 Nearly two months after Hurricane Harvey cut a swath across southeast Texas, local media reports are telling the story of a slow, painful recovery—from a school district that has lost more than one-third of its students, to a possible threat to nearby coral reefs, to a decidedly mixed picture of the state’s legendary, big-hearted generosity.

During a panel discussion last week, Rockport, TX Mayor Charles Wax said the town of 10,645 will never permanently recover from the Category 4 storm. “Approximately one-third of the town was destroyed in the hurricane, and a significant portion of that will be impossible to rebuild,” Grist reports. “Only 300 of Rockport’s 1,300 businesses have reopened since the storm, 856 of Rockport’s 2,400 students have left the school district, and the town lost most of its trees in the storm. Disaster relief crews have cleared almost 800,000 cubic yards of vegetation felled by hurricane winds and rain. “

The problem for coral reefs in the Gulf of Mexico begins with the more than 13 trillion gallons (49 trillion litres) of water that Harvey dumped on the region, EcoWatch notes. The reefs can only survive in saltwater, and researchers have tracked a 10% drop in salinity at the Flower Garden Banks National Marine Sanctuary, 100 miles off the Galveston coast.

“We don’t yet know what impact the low salinity had on the reef while it was there,” said Rice University marine biologist Adrienne Correa. But according to the SEOS project, “sudden decreases in salinity due to high freshwater input by rivers or torrential rains” are considered a factor “for the disappearance of massive coral reefs in front of large river mouths.”

“When people look at the impact of hurricanes on coral reefs, they often look at physical damage or breakage of reef frameworks by waves and storm surge,” she said. “Much less is known about the impacts of freshwater influx from the precipitation associated with a hurricane.”

The hope is that “Harvey’s floodwater plume continues to travel down the coast to the southwest so it will miss the fragile reefs, since a direct hit of floodwater would likely devastate the reefs,” writes EcoWatch reporter Lorraine Chow. But “even without a direct hit, it is possible that eddies and steering currents in the coming months could bring enough floodwater to the reefs to reduce salinity to dangerous levels.”

Back on land, the New York Times has news of incredible generosity from inmates in the Texas prison system—while the Washington Post carries a story on the baffling limits on the state’s capacity to care.

The state’s inmate population first got involved in disaster relief 12 years ago, donating about US$44,000 to people affected by Hurricanes Katrina and Rita. “So when Hurricane Harvey spun into Texas in August, some longtime inmates who remembered the previous efforts insisted that officials restart the program,” the Times reports. “In about one month, officials say, 6,663 inmates donated $53,863 for Hurricane Harvey relief—an astonishing sum considering many of the offenders typically have less than $5 in their accounts.”

“There wasn’t a person within the prison system who didn’t know a hurricane was going on,” said Criminal Justice Department spokesperson Jason Clark. “Texans are generous people.”

But the Post had the other side of that coin, with a story on Texans hit by Harvey who are divided on whether the United States should assist Puerto Ricans struggling to recover from Hurricane Maria.

“It’s a problem, but they need to handle it,” said Houston resident Fred Maddox. “It shouldn’t be up to us, really. I don’t think so. They’re sitting back, they’re taking the money, they’re taking a little under the table. [Donald Trump is] trying to wake them up: Do your job. Be responsible.”

Maddox’s view is not unanimously shared across the city or state—or even in his own household. But it reflects many Americans’ confusion about Puerto Rico’s status as a U.S. territory (albeit with no representation in Congress, and no vote in presidential elections), and the White House Twitter account’s emphasis on the precarious state of the island’s power grid and finances before the hurricane struck.

“A survey released last week by the Kaiser Family Foundation found that the majority of Americans believe the federal government has been too slow to respond in Puerto Rico and that the island still isn’t getting the help it needs,” the Post notes. “But the results largely broke along party lines: While nearly three-quarters of Democrats said the federal government isn’t doing enough, almost three-quarters of Republicans said it is.”