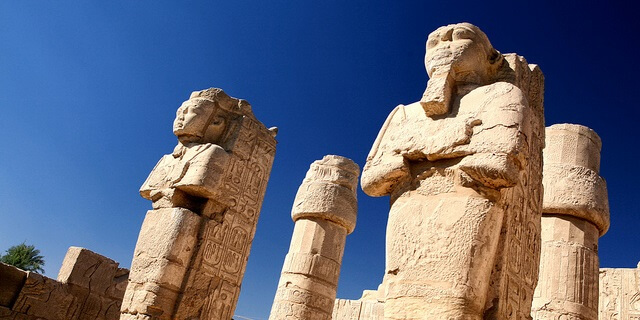 Scientists have shed new light on the downfall of ancient Egypt. Image: Shawn Clover via Flickr

Research into the impact of climate change on early society reveals link between environmental stress and the collapse of civilisations.

LONDON, October 23, 2017 – Two new studies highlight the interplay of natural forces on climate change – and how these may have led to the collapse of an ancient dynasty. Volcanic eruptions more than 2,000 years ago may have weakened the Ethiopian monsoon, suppressed the annual flood of the Nile, and played a role in the downfall of the Egypt of Cleopatra.

And, says a second research paper, explosive volcanic eruptions may be a factor in cyclical climate phenomena such as El Niño, that ominous bubble of heat in the eastern Pacific linked to failure of the rains in Indonesia in the western Pacific and dangerous floods on the west coast of the Americas. There is a practical purpose to such studies: they highlight the connections between environmental stress and political stability, and may separately forewarn of the kind of natural climate reversals that farmers rightly dread.

US and European scientists report in Nature Communications that they studied the famous Islamic “Nilometer” records of the Nile flood between the years 622AD and 1902, pored over papyrus records from the Ptolemaic era of Egyptian history – the dynasty founded by Alexander the Great from 305BC to 30BC – and matched these with evidence from ancient ice cores and computer models. They found that revolt against elite rule, and the halt to warfare between Egypt and its old rival the Seleucid empire could be linked to volcanic eruptions that clouded the upper atmosphere and affected the pattern of Nile floods.

“With volcanic eruption dates fixed precisely in time,
we can see society in motion around them. This is the
first time for ancient history that we can begin to
talk about a dynamic understanding of society”

“Ancient Egyptians depended almost exclusively on Nile summer flooding brought by the summer monsoon in east Africa to grow their crops. In years influenced by volcanic eruptions, Nile flooding was generally diminished, leading to social stress that could trigger unrest and have other political and economic consequences,” says Joseph Manning, a professor of history and classics at Yale University in the US, who led the research.

“Egypt and the Nile are very sensitive instruments for climate change, and Egypt provides a unique historical laboratory in which to study social vulnerability and response to abrupt volcanic shocks. Nile flood suppression from historical eruptions has been little studied, despite well-documented Nile failures with severe social impacts coinciding with eruptions in 939, in 1783-1784 in Iceland, and 1912 in Alaska,” Professor Manning says.

“With volcanic eruption dates fixed precisely in time, we can see society in motion around them. This is the first time for ancient history that we can begin to talk about a dynamic understanding of society.”

In fact, researchers have been trying to make such a connection for years, although with less direct written testimony. They have used circumstantial evidence to link climate change with the collapse of a Bronze Age empire in the Mediterranean and the fall of an ancient empire in Assyria.

They have identified ancient episodes of catastrophic drought in the Fertile Crescent, the birthplace of civilisation, and there has been a long-running but difficult battle to resolve argument about climate change and civil conflict provoked by the present bloodshed in Syria.

Separately, researchers have warned of the potential impact on the Nile as the world warms, because of carbon dioxide in the atmosphere from profligate fossil fuel combustion, along with ominous rise in temperatures that could dramatically affect North Africa and Southern Europe.

The Yale-led study provides both detailed evidence from a dynasty that ended with the death of Queen Cleopatra and the Roman occupation, and a wider lesson of vulnerability to volcanic eruption, which, the authors say, “offers a caution to all monsoon-dependent agricultural regions, presently including 70% of the world population”.

Quite separately, a week earlier, an international team led by French scientists reported in the same journal that they had matched aerosols in the stratosphere from volcanic eruptions with cooling over tropical Africa and episodes of El Niño within two years.

Volcanic blasts can lift millions of tons of sulphur dioxide into the stratosphere to deflect radiation and reduce global surface temperature: the researchers think they have evidence from climate simulations to show that such episodes favour the conditions for an El Niño. Sea surface temperatures since 1882 suggest that five major eruptions in the 20th century were followed by at least four El Niño episodes and disruptive weather patterns in many parts of the world.

All climate scientists would need, says Alan Robock, an environmental scientist at Rutgers University in the US, and one of the authors, would be a figure for sulphur dioxide levels in the upper atmosphere – easily measured by satellite – and they could warn of climate hazard.

“If you’re a farmer and you’re in a part of the world where El Niño or the lack of one determines how much rainfall you will get, you could make plans ahead of time for what crops to grow, based on the prediction for precipitation.”
– Climate News Network