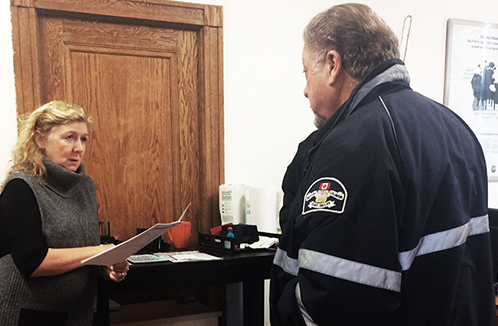 Two sheriffs raided the downtown Vancouver offices of Stand.earth Tuesday morning, expecting to seize the organization’s computers and furniture to cover costs in its losing court battle against Enbridge’s Line 9 pipeline in 2014.

“The provincial bailiffs took photos of the environmental group’s computers and other assets and told staff to expect the arrival of a moving van,” National Observer reports. The story immediately erupted on social media, and Enbridge soon announced on Twitter and in an email to the Observer that it would not be pursuing the seizure.

“We have asked the sheriffs not to seize any assets from @standearth and we will not be pursuing the matter further,” the C$34.5-billion pipeliner tweeted just before 1 PM local time. “This is a legal matter and Enbridge does not publicly discuss legal matters.”

Stand.earth found the timing of the confrontation “very suspicious,” said Campaigns Director Karen Mahon. “Enbridge isn’t after $14,000. Pipeline battles are heating up. Kinder Morgan is about to start construction” on its Trans Mountain pipeline expansion, “and this looks like a clear attempt to silence opposition.”

The expense claim traces back to a court fight in 2014 in which Stand.earth, then known as Forest Ethics, argued the public had not been adequately consulted on Enbridge’s Line 9 pipeline between Ontario and Quebec. The company was an intervenor in the case, Stand.earth eventually lost, and the court awarded the company $14,559 in costs. Mahon said the group refused to pay on principle, arguing it had acted in the public interest, and Stand.earth spokespeople said Enbridge ignored attempts to reach a settlement.

By now, Mahon says, Stand.earth’s court arguments have been substantiated by the Trudeau government and the National Energy Board, both of which “have since admitted that their public participation processes are inadequate. That was the basis of our case.”

On the Stand.earth website, Mahon describes the attempted seizure as “an outrageous act of bullying by Enbridge.” The pipeline giant “is a massive corporation that earned $4.6 billion last year,” she adds, “yet is demanding Stand.earth pay their court costs, even though time has proven them wrong.”

In San Francisco Monday, a U.S. Federal Court judge dismissed a US$300-million suit against Stand.earth and Greenpeace by Resolute Forest Products, Canada’s biggest logging company. But the court gave Resolute leave to refile its case, and in an email to supporters, Mahon said the company may do just that.

“It’s been an interesting 36 hours,” she wrote.