Ontario Promises Another Look at Health Concerns In ‘Petrochemical Valley’ 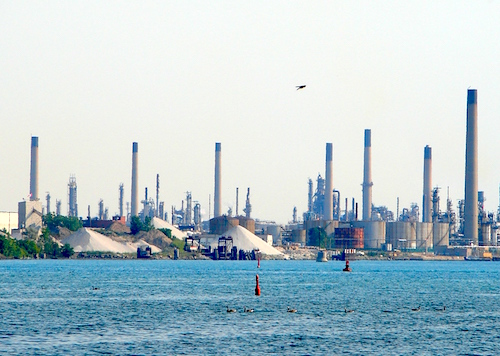 Years after it last promised to look into the health impacts from one of North America’s densest concentrations of petrochemical refineries, the Ontario government has committed to fund such a study—days after the long-standing concern was again exposed in the media.

“We are committed to funding a health study to understand the localized impact of air pollution on Sarnia residents,” Environment Minister Chris Ballard said in a statement Monday, “and will be working with the communities in the coming weeks to determine how best to do that. We will also be taking further steps in the near future to ensure that air quality is improved.”

The clear, if vaguely-timed and poorly-detailed promise came after Global News, the National Observer, and the Toronto Star began to publish the results of a months-long joint investigation of Canada’s fossil fuel industry, upstream and down, conducted with the Michener Awards Foundation and journalism schools at Ryerson and Concordia universities.

Ontario’s study, if it occurs, will need to look closely as well at the small First Nations community “situated at the heart of one of the largest petrochemical complexes in the world.”

Aamjiwnaang, as the team wrote in the report that jarred Ballard into action, is still waiting for answers, eight years after the Ontario government last promised to look into evidence that it has paid a heavy price in damaged health for being surrounded by leak-prone facilities where the byproducts of crude oil are turned into frequently deadly petrochemicals.

If you include facilities across the St. Clair River in Michigan, “there are 57 polluters registered with the Canadian and U.S. governments within 25 kilometres.”

Evidence of government efforts to protect the people of Aamjiwnaang and Sarnia from possible risk is much thinner.

In 2014, 338 kilograms of ammonia were spilled in the chemical corridor, but the amount was within regulatory tolerance and so “received no field response” from the provincial environment ministry. Nor did a 2016 “release of sulphurous gases that occurred during an unplanned shutdown,” or a report that in 2014 “a valve was left open [at a refinery] for three months ‘so the refinery fuel gas was being emitted straight to the atmosphere.’”

In fact, despite some 500 spills reported in the Sarnia area since January 2013, “only four have resulted in charges from the Ministry of the Environment,” the journalists wrote.

Meanwhile, appeals invoking the provincial Environmental Bill of Rights for investigation of the petrochemical industry’s impacts on Sarnia and Aamjiwnaang languished for years before an unresponsive government.

Before his promise to fund the still to-be-determined study now, the rookie environment minister had defended his department’s “scaled” response to toxic spills, saying it was important to make offenders feel “comfortable.”

“Everything that we’re made aware of, we respond to in some way,” Ballard insisted. “But it’s a scaled response.

“I would rather make sure businesses feel more comfortable reporting a spill so that we can educate them about how not to have that happen again, than to have them so terrified that they don’t want to talk to authorities, that they try and hide.”