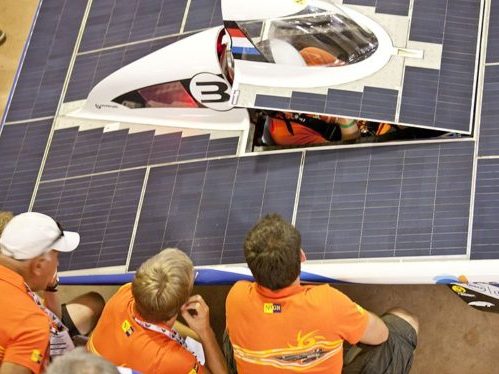 A family car that “refuels” while standing in the sun and can go from Quebec City to Windsor on a single charge may not be as far-fetched or far off you might think, after a vehicle with some of those characteristics won Australia’s bi-annual World Solar Vehicle Challenge.

The contest, now in its 30th year, saw 41 vehicles compete to make the best time across 3,000 kilometres of Australia from Darwin to Adelaide, The Guardian reports.

In the Challenger Class, for “slick, single-seat, aerodynamic vehicles built for sustained endurance and total energy efficiency,” a Dutch entry dubbed the Nuna won—for the third time running—with an average speed of 81.2 kilometres per hour.

But even more impressive in its way was the only slightly slower winner of the Cruiser Class competition. Fielded by another Dutch team, Eindhoven, the Stella Vie family car carried five people the distance at an average speed of 69 kilometres per hour. By the end of the course, it had generated more power than it used.

On a sunny day in its native Netherlands, Team Eindhoven’s web page boasts, the Stella Vie’s onboard photovoltaic array “achieves a range of a 1,000 kilometres,” while “the surplus energy generated by Vie can be supplied back to the house or electric grid.”

Enthused event director Chris Selwood of the Cruiser category at large: “These incredible solar cars have been designed with the commercial market in mind and have all the features you’d expect in a family, luxury, or sporting car.”